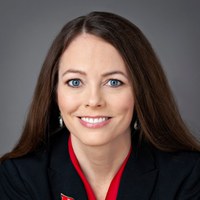 Shannon Rickett, a 1999 graduate of the McConnell Scholars Program, was named one of 50 of The Kentucky Gazette’s 2019 notable women in Kentucky politics and government.

As the assistant vice president for governmental relations at the University of Louisville, Rickett is responsible for representing UofL’s legislative and political issues at the local and state level, including advocacy efforts to the Louisville Metropolitan Government, the Kentucky General Assembly, the governor’s office and executive branch agencies and coordinating lobbying activities at the national level.

She currently serves on the Governor’s Scholars Board of Directors and the UofL Athletic Association Board. She also is engaged in a variety of professional and civic activities, including participating in the Young Professionals Association of Louisville, the Junior League of Louisville and Leadership Louisville.

She previously served as a congressional staffer to U.S. Rep. Hal Rogers, of Somerset.

Rickett, a native of Corbin, Ky., earned a juris doctorate from Baylor Law School and a bachelor’s degree in business administration from UofL.