(March 21, 2011) LOUISVILLE, Ky. - Jeffrey Skinner, a creative writing and poetry professor at the University of Louisville, led McConnell Scholars through a collection of poetry by Wendell Berry, a Kentucky native and famed poet. 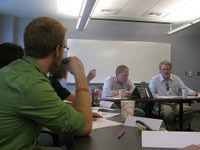 Jeffrey Skinner chose nearly a dozen of his favorite Wendell Berry poems and encouraged McConnell Scholars to identify the impressions, structure and practicality of the pieces.

"Poetry is like music — it reaches the soul," Skinner said, noting that poetry is an oral art that cannot be abstracted from its sound. He also pointed out the "delicate poise" of Berry's work and Berry's emphasis on iambic and rhyming structure.

Skinner also discussed a few of Berry's influences including the prominence of pastoral poetry. Skinner referenced "Fields and Gardens by the River Qi" by Wang Wei of the 8th century Tang dynasty and work by William Wordsworth.

"Berry's viewpoint of death is that it is the beginning, while Aurelius' is more pragmatic — a final acceptance," Morley said. Skinner added that Berry's point of view, as reflected in other pieces such as "Manifesto: The Mad Farmer Liberation Front," is that of the defiant poet.

Berry, a famed Kentucky poet, novelist, farmer and activist is the focus of several McConnell Center seminars and lectures this spring. The McConnell Center welcomes Dr. Patrick Deneen of Georgetown University on April 4 for a public lecture on Berry and the importance of literature on the natural sciences.