(Oct. 15, 2012) LOUISVILLE, Ky. - Junior Hunter Pittman has been named to the 2012 Homecoming Court at the University of Louisville. 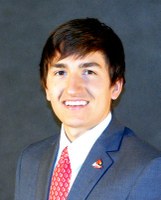 Junior Hunter Pittman, of Christian County, Ky., is one of 10 University of Louisville students named to the 2012 Homecoming Court. Pittman, an anthropology major, was sponsored by the Pi Kappa Alpha Fraternity. He is heavily involved in campus leadership, particularly as a student orientation staffer, a McConnell Scholar and in his fraternity.

Two other McConnell Scholars, seniors Justin Brandt of Campbell County and Jessica Bagby of Hardin County, were among the 20 homecoming court semi-finalists.

Homecoming King and Queen will be announced at halftime of the Oct. 20 UofL football against the University of Southern Florida. Kick-off is slated for 3:30 p.m. ET.