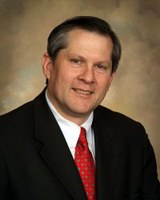 Nicholson's office brings in more than $34 million in annual revenue and employs approximately 300 deputy clerks in district, circuit and family courts, as well as the driver's license division.

"If you were a stockholder in a company this big, you would want to pay attention to what going on there. In a way, everyone in Jefferson County has stock in my office — their tax dollars," Nicholson told the group of 15 students at a luncheon lecture on Jan. 26.

"That is why it is important to elect accountable officials at all levels of government," said sophomore McConnell Scholar Justin Brandt. Brandt interned in Nicholson's office in the summer of 2010.

Nicholson was elected circuit clerk in 2006 and was president of the Kentucky Association of Circuit Court Clerks in 2010. He was previously Executive Director of the Louisville Metro Criminal Justice Commission.

He said he had little idea what he wanted to do while in college and took opportunities as they came. He said his success has come from his listening and personal communication skills, his attention to detail and "luck."

Brandt and Nicholson are both members of the Sigma Chi Fraternity.

The Local Leaders Lecture Series was created to bring community leaders to share their experiences with tackling the challenges facing Louisville and Kentucky. Guests also share career advice with our McConnell Scholars.