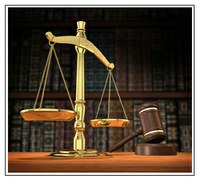 Competitors' oral arguments consider fictitious incidents and seek to determine whether the federal government violated the Fourth Amendment by requiring an Internet Service Provider to turn over content of a subscriber's chat room dialogue and whether the facilitation of chat room in which conversations allegedly threatening the president occurred was protected by the First Amendment.