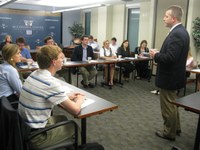 Coach Neil Salyer and a panel of guest judges

Under the direction of McConnell Scholar alumnus Neil Salyer (Class of 2001, Magoffin County), three McConnell Scholar teams will compete Nov. 19-20, 2010, in the Southeast Regional Moot Court Competition. The event will be held at the University of Tampa and is one of eight regional competitions under the American Collegiate Moot Court Association.

Through simulated appellate arguments, the teams will argue a fictional case before panels of judges on the possible errors made during trial court proceedings. Their oral arguments will consider the issues of whether the U.S. government exceeded its constitutional powers under the Commerce Clause in enacting the Affordable Health Care Act and whether the Fourteenth Amendment forbids states to refuse to legally recognize the validity of marriages involving persons of the same sex.