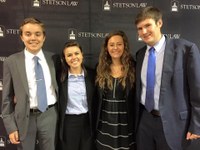 The McConnell Center’s moot court program was recently named a top 20 program by the American Collegiate Moot Court Association (ACMA). This puts the program alongside national powerhouses including Duke University and the University of Virginia.

Made up exclusively of McConnell Scholars, the McConnell Center’s moot court team represents the University of Louisville and is the only undergraduate program in the Commonwealth of Kentucky.

These achievements factored into the 20th place ranking, based on metrics from the ACMA.

Since 2008, the team has been coached by Neil Salyer, a McConnell Scholar alumnus (’01). Participation on the team is a large undertaking, as students typically spend a semester researching, writing and practicing their oral arguments, in addition to their normal coursework and extracurricular activities. Each competition team is made up of two scholars who handle half of the argument.

In recent years, the team has also served as an opportunity for McConnell Scholar alumni to mentor and help current students interested in legal topics.  Sean Williamson (’11) serves as an assistant coach with Laughlin. Alumni Ben Weyman (’13), Eric Kiser (’12), Meagan Floyd (’13) and Mike Adams (’98) help with judging and offering advice.

This year’s case deals with voting rights issues, and the team is scheduled to compete on December 3 in the Great Lakes Regional at Saginaw Valley State University.