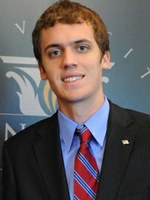 The Middlebury Spanish Immersion Program is a seven-week intensive language immersion program. Moore signed a pledge promising to speak in only Spanish for the entirety of the program and has promised to keep contact with English-speaking family and friends to a minimum.

In addition to Spanish language courses, Moore will also have the opportunity to take lessons in Hispanic cooking, dance and film.

While studying abroad in London last semester, Moore visited Spain, where his interest in the Spanish language, which he had studied in high school, was reignited.

Moore will enter the immersion program at the intermediate level and will take 300 and 400-level Spanish courses upon his return to UofL in the fall.

Moore is a sophomore McConnell Scholar at the University of Louisville studying political science, economics, international business and Spanish. He is also a Harlan Scholar and serves as the director of partnerships for the nonprofit organization Helping Hands Serving Hearts and as philanthropy chair for UofL’s Sigma Chi Fraternity.