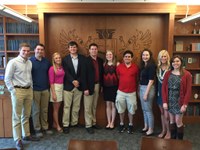 Final meeting of the Dante Society

McConnell Center Director Gary Gregg, PhD, that he was inspired to create the “Dante Society” after realizing how frequently Dante’s work came up in Scholar seminars last spring, particularly discussions on Robert Penn Warren’s All the King’s Men and Wendell Berry’s Jayber Crow.

“It seemed like we were being led to read Dante himself, to really sink in and learn the works rather than merely speculate on the meanings and connections referenced in other literature,” Gregg said.

Rabin led five seminars on Dante in the fall, and the Society completed “Inferno” this spring over four seminars.

“The McConnell Center constantly pushes me to tackle works of literature that I did not expect to ever read or understand,” said Macey Mayes (‘18). “But with encouragement from the Center and Dr. Rabin’s invaluable teaching, I can now say I have successfully made it through Hell... or, at least Dante’s version of Hell!”

Kyle Hilbrecht (‘18) also enjoyed his time in Dante Society. “Dr. Rabin really made the material fun to learn and easy to understand,” said Hilbrecht. “I will miss the stimulating and intellectual discussions we had as we journeyed along with Dante.”

Scholars said they hope Rabin will continue to lead seminars for other famous works of literature. Suggestions for the coming year include Dante’s “Purgatorio,” the second work in Dante’s “Divine Comedy,” and various works by Shakespeare.