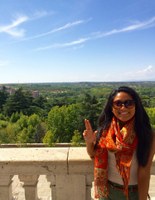 scholarship, Lalata is taking courses in Spanish language, Spanish politics and Middle Eastern relations at the Universidad de Sevilla, one of the nation’s highest-ranked and oldest universities located in the Andalusian province in southern Spain.

“The hardest part of studying abroad is definitely getting through the language barrier,” Lalata said. “It has been a personal challenge to build the confidence to speak the language without hesitation or fear—but that is perfectly okay with me.”

Lalata’s average day consists of eight hours of coursework, supplemented by trips to local cafes, museums, and, of course, a three-hour siesta (nap) at her homestay in the afternoon. During her free time, Lalata has explored other parts of Spain including Toledo, Granada, Cordoba and Ronda.

“The architecture of the Mezquita in Cordoba and the Alhambra in Granada tell a truly breathtaking story of struggle and transformation from a Muslim Empire to a Christian Empire, creating what I consider a beautiful mess,” Lalata said.

Lalata said the experience has guided her toward a globally oriented perspective she will bring back to her studies at the University of Louisville.

“There is something special in learning about history from a different, non-American viewpoint,” Lalata said. “It has inspired me to search for the missing side of history that was never told.”

In addition to improving her Spanish language skills, Lalata said the experience has helped her gain greater cultural awareness and sensitivity that will help in her future career. “At this time, I am not entirely sure of what I want to pursue, but I know that I want to help people. I am considering teaching, especially within communities of immigrants and refugees.”