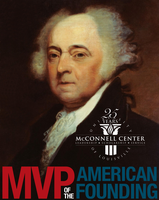 For three years, the McConnell Center has held a debate series to answer a burning question: Who was the MVP of the American Founding?

In 2014, Alexander Hamilton bested Thomas Jefferson in an audience vote, and in 2015 the crowd chose John Adams over James Madison. On Sept. 16, the McConnell Center hosted its final debate in the Chao Auditorium.

After an intense debate between Michael Federici of Mercyhurst University (supporting Alexander Hamilton) and R.B. Bernstein of the City College of New York (supporting John Adams), the crowd in the packed auditorium chose John Adams as the MVP of the American Founding.

Part of the McConnell Center's annual Constitution Day celebration, the debate rounded out a day in which McConnell Scholars passed out free pocket Constitutions and cupcakes to UofL students.

The McConnell Center's lecture series will continue on Oct. 12 at 6 p.m. in the Chao Auditorium with a lecture by Bill Allison on "The American Soldier in Vietnam."