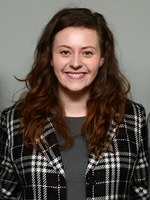 Humphrey has been named a Freshman LEAD Director for 2014-2015

As “Freshman LEADers,” Ball, Lalata and Humphrey attended a retreat each semester, bi-monthly meetings and seminars with campus and local leaders.

According to the Freshman LEAD website, “[s]tudents are introduced to leadership skills that expand their social networks and broaden their horizon to meeting a dynamic group of friends, which promotes a sense of community and encourages students to build upon their leadership potential.”

Ball, Lalata and Humphrey were three of 60 invited to participate in this leadership program following a competitive interview process back in August.

Humphrey has been selected to serve as a Freshman LEAD Director for the 2014-2015 school year.