Feb. 18, 2010 - Dr. Bradley J. Birzer, a McConnell Center non-resident fellow, pens a biography of the last living signer of the Declaration of Independence. 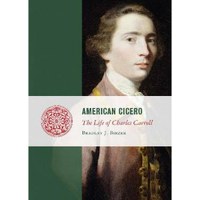 The 230-page book is part of the "Lives of the Founders Series."

"We are proud to have Brad as one of our original Non-Resident Fellows," said Dr. Gary Gregg, director of the McConnell Center. "His work on John Carroll dovetails perfectly with the Center's work to help America remember some of our 'forgotten founders.'"

Before his death in 1832, Charles Carroll of Carrollton—the last living signer of the Declaration of Independence—was widely regarded as one of the most important Founders. Today, Carroll's signal contributions to the American Founding are overlooked, but American Cicero: The Life of Charles Carroll rescues him from unjust neglect.

Drawing on his considerable study of Carroll's published and unpublished writings, Birzer captures a man of supreme intellect, imagination, integrity, and accomplishment. Born out of wedlock, Carroll nonetheless became the best educated (and wealthiest) Founder. The Marylander's insight, Birzer shows, allowed him to recognize the necessity of independence from Great Britain well before most other Founders.

The book can be purchased through major venues including ISI Books and Amazon.

Dr. Bradley J. Birzer is one of two non-resident fellows for the McConnell Center. He holds the Russell Amos Kirk Chair in History at Hillsdale College. The author or editor of four other books, he has written and taught extensively on the American experience. Birzer also serves as chairman of the board of academic advisors for the Center for the American Ideas in Houston. He and his family live in Michigan.