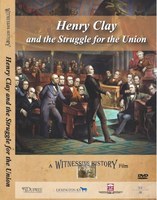 The Telly Awards is "the premier award honoring the finest film and video productions, groundbreaking web commercials, videos and films, and outstanding local, regional, and cable TV commercials and programs," according to its website.

"Henry Clay and the Struggle for the Union," a 56-minute documentary on Henry Clay and the compromises of 1820, 1833 and 1850, was partially underwritten by the McConnell Center at the University of Louisville.

The documentary, listed for $24.95 and available for purchase online, considers Clay's role in holding off the "War between the States" and explores the impact of slavery on the westward expansion of nation. The film is illustrated with period photographs, art, footage of the old senate chamber and dramatic interpretations performed by professional actors. It is produced by Witnessing History.