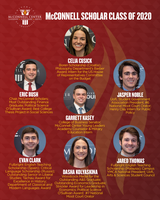 While their final semester at the University of Louisville turned out much differently than anyone could have anticipated, the McConnell Scholar Class of 2020 ended their undergraduate experience by winning top university and national awards.

“What memories I have of each of you,” McConnell Center Director Gary Gregg said. “This class has excelled in their leadership positions on campus, in their travels abroad and their ability to win national and competitive awards. I know they will continue to excel as they head into their next adventures."

Due to the coronavirus, university classes transitioned online earlier this semester, and graduation ceremonies, including the center's annual celebrations, have been postponed.

This graduating class marks the 25th in the center's history. Notable highlights for each graduating Scholar include:

During the course of four years, these Scholars traveled to the People’s Republic of China, took part in behind-the-scenes tours of Washington, DC, and participated in annual leadership retreats around the Commonwealth.

The McConnell Scholarship is considered among the university’s most prestigious undergraduate scholarships.