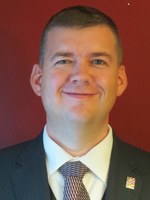 Matthew Webster, the first chair of the McConnell Scholars Program and Boone County, Ky.’s, assistant county administrator, is the fourth in our profile series. Matthew Webster, a 1996 graduate of the McConnell Scholars Program, understands the importance of great timing.

It was great timing that Webster happened to be in his high school’s front office when a field representative from U.S. Sen. Mitch McConnell’s office stopped by to discuss the newly established McConnell Scholarship at the University of Louisville.

“I was the class president and happened to be in the office meeting with the principal. I literally bumped into the senator’s representative,” Webster said. His guidance counselor encouraged Webster to learn more about the full in-state scholarship to UofL.

“We started a dialogue and the more I learned, the more interested I became and was ultimately offered a scholarship,” Webster said. “Timing is everything.”

Dr. Paul Weber, the founding director of the McConnell Center, extended a McConnell scholarship to Webster, who became a member of the first cohort of McConnell Scholars in 1992. Those first Scholars met President George H.W. Bush that semester.

“Nothing has ever quite compared to walking into the West Wing and standing in the Oval Office,” Webster said. “The 15-hour trip to D.C. and back gave that first group of Scholars a chance to bond, build friendship and forge a relationship with Dr. Weber. I believe that trip was key to the program beginning its tremendous journey.”

Webster said being a member of the inaugural class of scholars was a very hands-on experience he wouldn’t trade for anything.

“The curriculum and program elements were being created from scratch and evolving daily. We were beside ourselves when we were able to renovate the attic of Ford Hall,” Webster said. Now celebrating its 25th anniversary, the Center has since moved to a wing in Ekstrom Library and has expanded its programming to include professional development to Kentucky social studies teachers and the U.S. Army

Webster was elected the first chair of the Scholar Council, serving as a liaison between students and faculty, as well as helping coordinate scholar activities and events. He was also involved with UofL’s Resident Student Association and served as the group’s president for several terms.

He said the McConnell Scholars Program’s emphasis on leadership development, networking, mentorship and service to Kentucky left a lasting impression.

“I was very passionate about Sen. McConnell's goal of keeping Kentucky's leaders in Kentucky, so I had always planned to serve here in Kentucky,” Webster said.

After earning his undergraduate degree in political science and philosophy, Webster graduated from UofL’s Brandeis School of Law in 1999. He served in higher education administration for 15 years at Thomas More College in northern Kentucky. His roles included dean of students, vice president for operations and community affairs, vice president for student services and director of student life.

Today, Webster serves as the assistant county administrator and public information officer for Boone County, Ky., and is responsible for supervising county departments, managing county projects and working to enhance community engagement with more than 130,000 residents.

Twenty years since he graduated from the Scholars program, Webster said the Center’s founding vision of identifying, attracting and nurturing Kentucky’s young leaders to become future leaders around the Commonwealth is paying off.

“Sen. McConnell’s legacy will live on through the McConnell Center for generations to come,” he said. “The Center is having a positive impact on all sectors in Kentucky, and the critical need for committed, ethical leadership only continues to grow.”