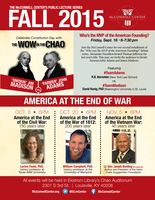 Who was the MVP of the American founding? What does America look like at the end of war, and how could such insight inform current debates on war?

The University of Louisville’s McConnell Center will discuss these central questions in a series of public talks this fall. All talks are free and will take place in Ekstrom Library’s Chao Auditorium. Topics, speakers, times and dates are:

“These talks are designed to foster dialogue about how our past can inform current and future debates about war, as well as unearth often-overlooked key figures of the American Founding,” said Gary Gregg, McConnell Center director.

The non-partisan McConnell Center, created at UofL in 1991, prepares Kentucky’s top college students to become leaders and offers civic education for teachers, students and the public.