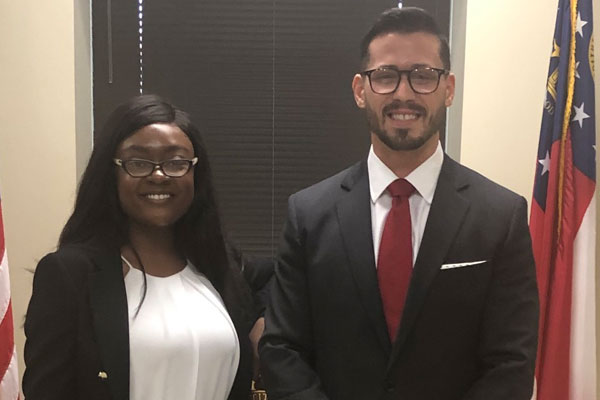 A team of students from the University of Louisville School of Law will compete for the 2019 national title at the Saul Lefkowitz Moot Court Competition March 16.

The competition, which focuses on U.S. trademark and unfair competition law, is hosted by the International Trademark Association and will be held in Washington, D.C.

Third-year students LaQuasha Combs and Christopher Zelli will compete against 11 other teams for the national title. At the regional championships in February, Combs and Zelli won best brief and best overall score, competing against schools such as the University of Alabama, Emory University, George Mason University and William and Mary Law School.

Looking ahead to nationals, Zelli says the team is "up for the challenge."

The problem comprises three issues related to trademark, and each team is given 30 minutes per oral argument.

Combs and Zelli, who are both interested in litigation careers, agree that the moot court experience has strengthened their oral advocacy skills.

And they both credit much of their moot court success to their coach, Jack Wheat, a Louisville Law alum and a partner at McBrayer, McGinnis, Leslie & Kirkland, PLLC.

Wheat, whose practice focuses on trademark and intellectual property, has coached the trademark team since 1984.

"You can tell he's really passionate about what he does," Combs says.