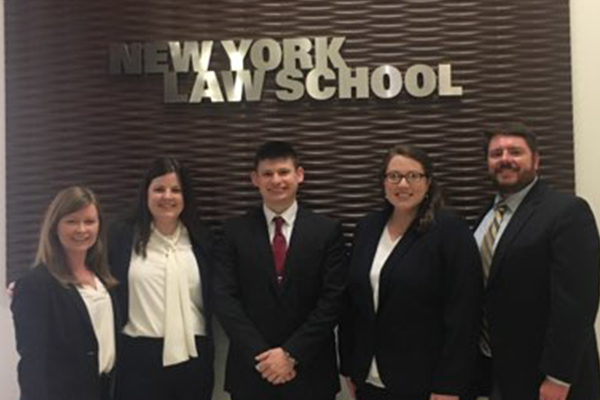 Erin Shaughnessy, a 3L at the University of Louisville School of Law, was named Best Respondent Preliminary Round Oral Advocate at a national moot court competition in March 2019.

More than 30 teams, each with two or three members, competed this year.

"The fact that out of everyone that argued in the preliminary round, I was chosen as the best on the respondents' side, I was very surprised but very happy," says Shaughnessy.

This year was her second experience at the Wagner competition, and Shaughnessy says that she noticed a definite improvement in her skills from 2018. Her confidence had grown, and she better understood the basics so that she was able to focus more on the bigger picture of the competition.

"I was able  to absolutely improve and become a better oral advocate," she says.

"I really enjoyed it, and that's what I think I want to do once I get out into practice," she says.

Shaughnessy credits the dedication of her coaches, Louisville Law alumni Carolyn Purcell and Ben Basil, with the team's success.

"The level of support that they put into the team is absolutely amazing," she says. "Each year, they've been able to help us not only succeed in the competition but also bonded the team."

Louisville Law students Trent Taylor and Anita Zipfel were also on the team this year.