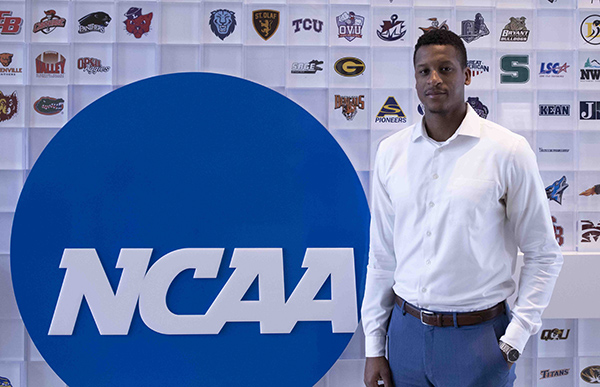 Donovan Gibbs is spending the summer of 2019 as a legal extern with the NCAA.

As a summer law extern with the NCAA, rising 3L Donovan Gibbs is getting a glimpse of the behind-the-scenes work of regulating college athletics.

A former student-athlete himself — he played basketball for IUPUI from 2010-2014 — Gibbs says that he was already familiar with most of the NCAA regulations he has encountered this summer.

But he was surprised to learn that the NCAA doesn't create the laws its member institutions abide by; rather, it collects, maintains, interprets and enforces the laws voted on by the institutions.

Most of his work at the NCAA has involved legislative research, he says.

"A lot of my job has been reviewing proposals that have become amended laws to determine if older interpretations have been affected by this new amendment and if they need to be revised," he says.

While this externship hasn't been the typical law student summer job, Gibbs says he has appreciated the opportunity to learn more about the world of sports and entertainment law.

That's a big change from the experience he has gained as a intern in Hilliard Lyons' trusts and estates department. He has worked there throughout law school.

Wherever his career takes him, Gibbs says he knows law is the right path for him.

"I didn't know any lawyers growing up as a kid. I didn't know much about law school up until the day I got here. But it was just something that I always wanted. It was a goal of mine. I didn't understand what it was at the time, but now that I've done it and I'm going in to my third year, I couldn't imagine doing anything else," he says. "I really enjoy it. I'm confident that I made the right decision in going to law school.