Reflecting on the legacy of Justice Ruth Bader Ginsburg

Professor Laura Rothstein reflects on the legacy of Justice Ruth Bader Ginsburg. Professor Rothstein was dean of the Brandeis School of Law in 2003, when Justice Ginsburg accepted the School's Brandeis Medal. 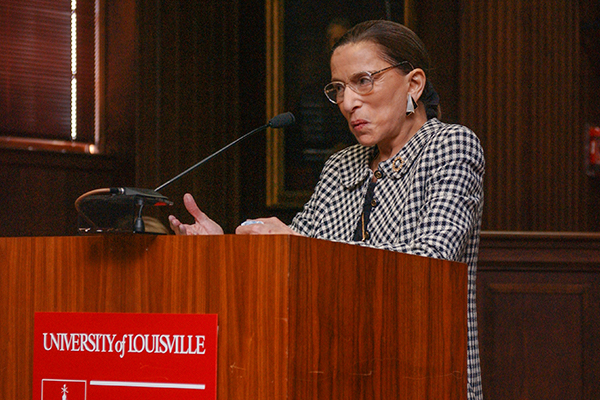 In 2003, Justice Ruth Bader Ginsburg received the Brandeis Medal from our law school. The award recognizes individuals whose lives reflect Justice Brandeis’s commitment to the ideals of individual liberty, concern for the disadvantaged, and public service. Her work on issues of women’s equality and her public service, both as an advocate and on the Court, was the reason for her selection for our School’s highest honor. Justice Ginsburg’s advocacy work was initially honed in the field of civil rights litigation at the American Civil Liberties Union and her work reflected the Brandeis principle of using law as a means for social change.

It is with profound sadness that we note her passing as we reflect on her legacy and her connection to our law school and to women in the legal profession.

As dean of the Brandeis School of Law at that time, it was my honor to serve as host to Justice Ginsburg at the Brandeis Medal dinner. When she delivered her talk - to a record-breaking audience of over 700 — you could hear a pin drop. Although she was diminutive in stature, she commanded the attention of everyone in the room. Justice Ginsburg’s talk was entitled From Benjamin to Brandeis: Is There a Jewish Seat?

Melvin Urofsky in 2015 published Dissent and the Supreme Court:  Its Role in the Court’s history and the Nation’s Constitutional Dialogue.  Brandeis was known for his dissents, and his dissents are prominent in the Urofsky book. Brandeis was selective and wrote dissents only when he thought it was necessary. Similarly, and especially in recent years, Justice Ginsburg’s dissents have received significant attention – as they did in Urofsky’s book. In her commentary on Dissent Is an “Appeal” for the Future, Justice Ginsburg noted that she hoped to be “granted similar wisdom in choosing my ground.”

Women in general have benefitted from Justice Ginsburg’s work on gender equity. Women in the legal profession, including law students and law professors, have been impacted by her work. Professor Ginsburg began teaching law school at Rutgers in 1963, and was one of the first chairs of the Association of American Law Schools Women in Legal Education Section (formed in 1970). This section was important during a time when there were few women law faculty members at any law school and so they made connections with those at other law schools. The experiences of those women in an era when there were few female students, faculty, and lawyers meant that it was especially important for figures like the future Justice to mentor law students and younger law faculty members and lawyers, both men and women. As a young professor, Justice Ginsburg embraced this role with gusto; she believed that making life better for women makes life better for everyone.

Justice Ginsburg’s work has made such a difference on issues of gender and on so many areas of the law. We are inspired by her work and her words and her resilience against setbacks, and the hope that her example continues to demonstrate how law can be used to make social change.