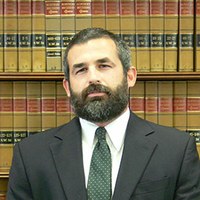 Earlier this week, the Electronic Frontier Foundation – a leading nonprofit organization defending civil liberties in the digital world – drew heavily from Louisville Law Professor Luke Milligan’s writings on the original meaning of the Fourth Amendment in an amicus brief filed with the U.S. Supreme Court in the case of Los Angeles v. Patel.

Los Angeles v. Patel addresses the constitutionality of a municipal ordinance requiring hotel operators to maintain guest registry information, and to make such information available to police officers on request without consent, a warrant, or other legal process. Owners and operators of hotels in Los Angeles filed suit, claiming the ordinance violated the Fourth Amendment of the U.S. Constitution. Last year, the U.S. Ninth Circuit, sitting en banc, held the ordinance was unconstitutional.

The U.S. Supreme Court will hear oral arguments on March 3.

The amicus brief states, in part:

Indeed, the warrant clause expressly regulates the issuance of warrants, not their execution. The founding-era discourse concerning searches and seizures—“which regularly emphasized the harms attributable to the potentiality of unreasonable searches and seizures”—further supports that the Founders intended the Fourth Amendment to have prophylactic effect. Id. at 718 (emphasis in original). The very text and history of the Amendment thus calls for a protective buffer against unreasonable governmental intrusion to ensure that constitutional violations are prevented—not merely dealt with after the fact.

The brief is available in its entirety online.

In addition, Milligan will present his interpretation of the Fourth Amendment at the University of Michigan Law School as part of its symposium on “Privacy, Technology, and the Law.” The event will be held Feb. 21 in Ann Arbor.