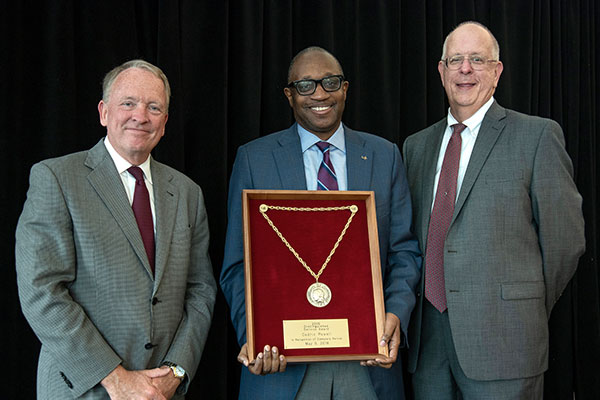 For Professor Cedric Merlin Powell, service is integral to the legal profession and the role of lawyers as public citizens.

Powell lives out these beliefs through his service to the Brandeis School of Law, the University of Louisville and the city of Louisville. His work was formally recognized by UofL on May 9, when he was presented with the university's 2018 Distinguished Service Award.

Powell, who was nominated by the faculty at the Brandeis School of Law, says he was pleasantly surprised at the honor.

"A truly effective lawyer and law professor is one who is engaged with the community," he says.

Powell, who has been on the law faculty since 1993, has a wide range of service on his resume. He highlights two roles as especially meaningful.

First, his work with Louisville's public transportation service, Transit Authority of River City (TARC). He was first appointed to the board by Mayor Jerry Abramson in 2003 and has served as chair since 2008.

He is committed to TARC's mission of accessibility and sustainability and notes that 47,000 people ride TARC daily, most of them using the buses to get to and from school or work.

"That's having an impact every day," he says.

Powell also notes his role as UofL's Faculty Grievance Officer, a role he has held since 2016. In this position, he gives faculty a sounding board as they work through grievances.