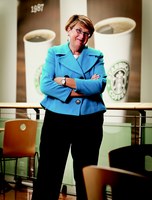 Lucy Helm, a 1982 graduate of the Brandeis School of Law, has been named chief partner officer for Starbucks, heading human resources for a company that employs 330,000 people worldwide.

Before taking that post, Helm served as Starbucks' executive vice president, general counsel and secretary for more than five years.

Read an in-depth look at Helm's Starbucks' career in The Seattle Times.