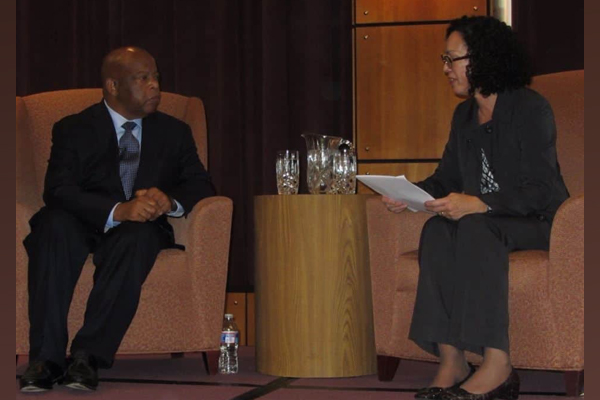 The University of Louisville School of Law mourns the loss and honors the legacy of Representative John Lewis.

Representative Lewis was awarded the School of Law’s highest honor, the Brandeis Medal, in 2000. He again visited campus in 2013 as part of the Kentucky Author Forum. In 2018, his civil rights work was recognized in a Law School Diversity Forum.

The Brandeis Medal honors individuals whose lives reflect Justice Brandeis’ commitment to the ideals of individual liberty, concern for the disadvantaged, and public service. Representative Lewis was recognized because of his “lifelong commitment to human rights, preservation of personal dignity, and unfailing support of social justice, and one of the most courageous persons in the Civil Rights Movement.”

“On the day of his passing, Representative John Lewis joined in a bipartisan letter to Secretary of Education Betsy DeVos asking her support for grants to support teacher preparation about civics.  This letter exemplifies his tireless advocacy for social justice and civil rights. He died only hours later after a long battle with cancer,” says Professor Laura Rothstein, co-chair of the Brandeis Medal Committee.

During Representative Lewis’s 2013 visit to the University of Louisville for the Kentucky Author Forum about his trilogy graphic novel March, he was interviewed by Rachel Maddow at the event at the Kentucky Center. For his on-campus interview for the university community, Louisville Law Professor Enid Trucios-Haynes had the honor of interviewing Congressman Lewis.

“Congressman Lewis clearly enjoyed the presence and energy of the young people in the room, knowing that these young people were critical to the work of social justice and civil rights,” says Rothstein.