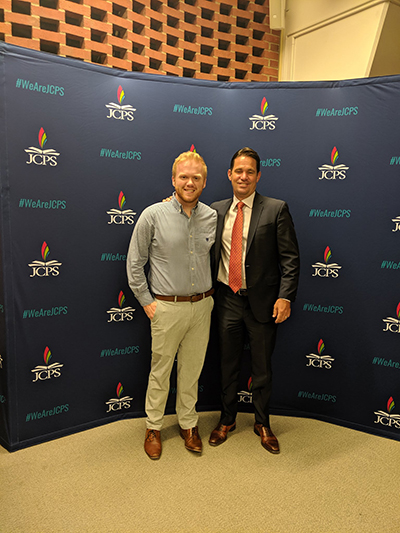 When he entered law school, rising 2L Michael Shelton knew he wanted to pursue a career in education law.

That spark was ignited during his undergraduate studies at Western Kentucky University, where he majored in psychology and criminology. His criminology studies introduced him to the world of juvenile justice, and he interned with the Public Defenders Office in Bowling Green, Kentucky.

"I'd go over to the juvenile detention center and it was heartbreaking to see some of these kids that were part of a school-to-prison pipeline," Shelton says. "One that stuck out to me was someone who was 16 or 17 and he was a foster child who was bounced from place to place to place. He said that no one ever took the time to invest in him because they saw him as a transient kid that was going from school to school."

After graduating from WKU, Shelton spent a year as an admissions counselor for the university. In that role, he was exposed to the inequities in the education system, especially between public and private schools.

Law school had always been a goal of Shelton's.

"I kind of wanted to go into direct services to start helping people right away. But I realized that to make a bigger impact, having the law degree and the law background will definitely be applicable to whatever I choose to do," he says.

And it was Professor McNeal who helped guide him to the internship he landed for the summer of 2019 with Jefferson County Public Schools. She knew of a former student who had worked for the Kentucky Department of Education and is now the executive administrator of JCPS' Office of School Choice. That office handles student assignments, magnet schools and charter schools.

Shelton says he spent his summer researching and analyzing legislation and statues applying to education.

"I think when people think education law, especially in a district, they think of the general counsel position, but there's so many intricacies in education. There's a lot of policies and procedures," he says. "I think my skills in researching and analyzing have been enhanced."