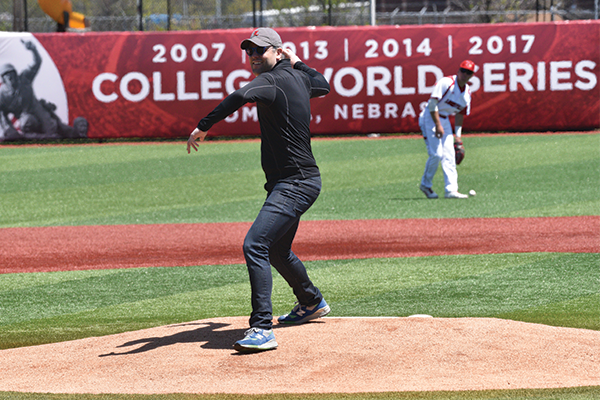 As a lifelong baseball fan and a dedicated educator, Professor Justin Walker saw two of his passions come to life April 29, 2018, when he threw the first pitch at a University of Louisville baseball game.

He was invited to do so by Austin Conway, a rising second-year student at the Brandeis School of Law who is also on UofL's baseball team.

"I was extremely excited," says Walker, who is a dedicated Chicago Cubs fan but acknowledges that he has no baseball skills of his own.

"In Little League, they always put me in right field because I was the worst player on the team," he says.

Nevertheless, Walker was determined to throw a respectable pitch. He bought a baseball and training net and began practicing. He ended up recruiting one of his students to help him practice, and "I went from atrocious to merely terrible," he says.

The day of the game, Coach Dan McDonnell gave Walker one piece of advice: Aim high. Walker ended up bouncing the ball two feet in front of home plate.

"The only success I had was not saying any four-letter words," Walker says.

But Walker said he still had a great experience. His love of baseball began when he was 7 years old and would watch Cubs games on TV after school. He was drawn in by the beauty of Wrigley Field and the voice of announcer Harry Caray.

"One of my top two or three favorite views in the world is that of a major league baseball diamond," Walker says.

He was thankful for the opportunity to throw out the first pitch for the Cards and thanked Conway, who he said did an excellent job of balancing his first year of law school with the demands of the baseball team.

"He does it with a smile and is always positive," Walker says of Conway.