Brandeis' only granddaughter dies at age 90 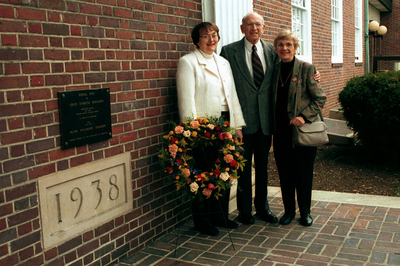 In 2001, Popkin (left) attended that year’s Brandeis Medal dinner. She is standing in front of her grandparents’ graves at the law school with Samuel Dash, her friend and recipient of that year’s medal.

Alice Brandeis Popkin, the only granddaughter of Justice Louis D. Brandeis, died in Chatham, Massachusetts, July 18, 2018. She was 90 years old.

A graduate of Yale Law School, Popkin devoted most of her career to public service until 1987, when she established a family law practice, according to her obituary.

Popkin visited the Brandeis School of Law several times, including in 2001 for the awarding of the Brandeis Medal to Samuel Dash in and 2006 for the sesquicentennial event marking the 150th birthday of Justice Brandeis.

On behalf of her family, Popkin also gave the law school the Brandeis oil portrait that now hangs in the dean's office.

Read an entry about Popkin from the Brandeis and Harlan Watch blog, written by Brandeis School of Law librarian Scott Campbell.