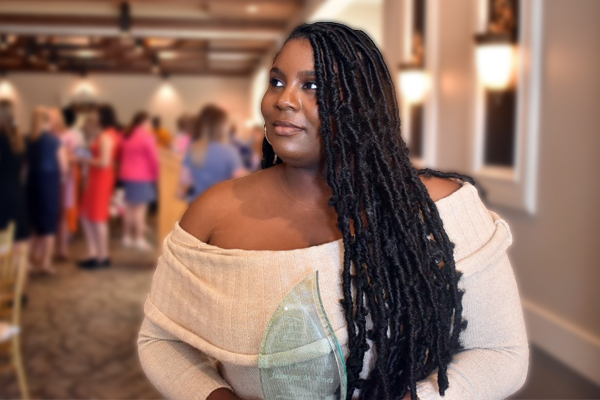 This year, 2L Jasmyne Jones, received a Rising Star award at the Women Deliver Democracy Awards and Luncheon on September 20th. The award was partly in recognition of her work on Craig Greenberg’s win in the Louisville Mayoral Primaries. Jones also worked for Stacy Abrams in Georgia, using remote technologies to manage her team.

Despite personal affiliations, when it comes to voter protection, she looks at things with an unbiased perspective. “There is a lot of disinformation being pumped out from a lot of sides. I want to be very non-partisan.”

Jones has a real passion for voter protection born from political engagement. As a result, she is working as a voter protection coordinator with the Commonwealth Alliance through CAVE (Commonwealth Alliance Voter Engagement). As a coordinator, she manages a team tasked with monitoring election proceedings. This can mean checking whether the polls open on time and don’t close early and investigating reasons people are denied the right to vote, such as wearing shirts or stickers with political messages. When issues are flagged, she directs the information to a team of lawyers and experts (including law students) and manages the intake forms necessary for the process.

Jones attributes much of her success to her surroundings, where the knowledge she’s gained guides her philosophies. “My community has made me who I am and has allowed me to grow. It’s exciting to bring people up with me as I am successful.”

Jasmyne sees a clear goal in her journey through her legal education and beyond. “I want to be a lawyer, but I really want to be a judge. Because I think, whether you are a Republican, Democrat or Independent, you deserve this country to work for and with you. I look at a person as a person, just like I treat voters equally--regardless of who they vote for.”