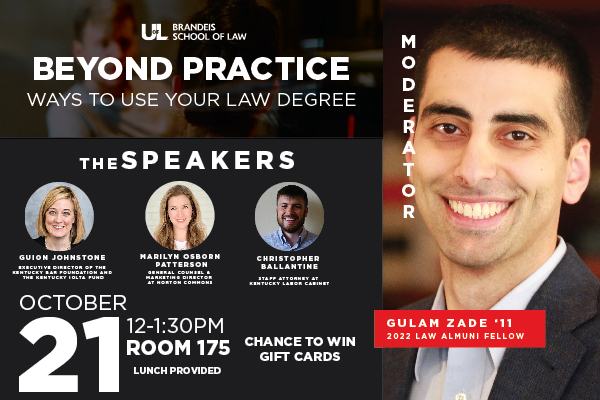 Gulam Zade (class of 2011), Louis D. Brandeis School of Law Alumni Fellow of the Year, has a remarkable resume for such a recent graduate.  After starting his legal career at Garfinkle, McLemore & Young in Nashville, he became partner and general counsel at LOGICFORCE in 2014, eventually becoming CEO.  He led LOGICFORCE’s acquisition by Frontline Managed Services, the leading global provider of outsourced solutions to the legal and accounting markets, and subsequently became Chief Legal Officer.  This ascent earned him numerous awards, including his recognition as a multi-year recipient of the Nashville Business Journal’s Best of the Bar award and 40 Under 40 award. He is also a recipient of the Nashville Area Chamber of Commerce’s Emerging Leader Award.

Although Zade has received many accolades, he is deeply honored by receiving recognition from his alma mater.  “It was very humbling to find out I was named the Law Alumni Fellow, especially given the love and respect I have for the University of Louisville,” he said. “It’s a big deal for me."

Zade is a very active member of the Brandeis community and the University of Louisville. He’s a member of the Dean’s Advisory Board, a fan of the Cardinals, and a man who is still very connected to the friends he made here and even launched a scholarship fund with them.

When asked how the University could honor him this weekend, he offered instead to give back even more.  “I want to have a conversation with students about what they can do beyond the traditional law firm roles.”  A panel session has been created, comprised of Zade and Guion Johnstone (Executive Director of the Kentucky Bar Foundation and the Kentucky IOLTA Fund), Marilyn Osborn Patterson (General Counsel & Marketing Director at Norton Commons), and Christopher Ballantine (Staff Attorney at Kentucky Labor Cabinet).  Zade is enthusiastic at the prospect.  “I want students to know they don’t have to go work for a law firm after earning their degree. There are lots of opportunities following Brandeis,” he said.

Zade wants the best future for students and shares the perspective he’s gained from his career.  “The best job is one where you enjoy what you’re doing. I give 40 hours a week to work, and I spend the rest of my time with my family and engaging in activities I enjoy.  I like my life, and not everyone can say that.”