Biology professor Cynthia Corbitt, staff and participants at this year's March for Science

The primary goals of March for Science (MfS) are to promote science, scientific literacy, and evidence-based policy making. The March for Science champions robustly funded and publicly communicated science as a pillar of human freedom and prosperity. MfS members unite as a diverse, nonpartisan group to call for science that upholds the common good, and for political leaders and policymakers to enact evidence-based policies in the public interest. 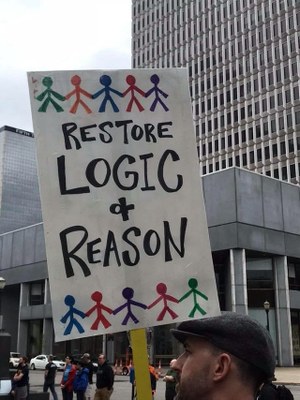 MfS is a decentralized organization that has a board, bylaws, and small staff. The satellite groups are those cities that put on marches in 2017/2018 in concert with the main marches in DC. Each satellite plans events independently, but has access to resources/tools provided by the main MfS group. Reps from satellite groups, such as Louisville, met as part of the S|GNS (Science | Government, Institutions & Society) Summit held in Chicago July 5-8. Other locations represented included Indianapolis, Charlottesville VA, Rochester NY, Denver, Kansas City, Mobile AL, Portland OR, San Diego, New York City, Oklahoma City, Mexico City, Ottawa, and Kenya.

Besides tackling improving policymaker knowledge about science, MfS is also engaged in discussions with scientists about the practice of science itself, inclusion of underrepresented groups as participants and leaders in science and science education, practices related to training and public dissemination of data.

Short-term plans are centered on the mid-term elections, working to elect people who promote science, who will help resist anti-science sentiment in government policy. Science is political because so many policies affect scientific endeavors and are affected by them. However, MfS is non-partisan and states that supporting evidence-based policy making and promoting science should not be a partisan issue.

One effort is “Science Debate”, an organization that has asked US Presidential campaigns to answer questions about science and science policy since the 2008 election, and all major party nominees have complied. This year, they are expanding their efforts to the mid-term elections and they encourage everyone to ask all candidates to answer the questions. Besides helping voters know the stances of the candidates, it helps the candidates develop their policies and plans on these issues in the event they are elected.

Vote For Science is an MfS-initiated effort. They ask voters to take the pledge stated on the .png file I have attached and they provide resources for voter drives and asking candidates to clearly state their positions on science-related topics.

Chinese activist to speak of #MeToo’s impact on feminist resistance

Grawemeyer Award in Psychology winners discuss their research on addiction

History of Louisville's great flood of 1937