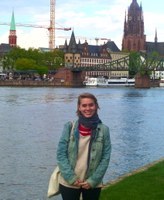 Joanna Thompson, UofL's fourth Fulbright Scholar to be named this year, in Germany in 2012.

Thompson will travel to Kayseri, Turkey, where she will teach English at Abdullah Gül University.

She expects to graduate from UofL in August and is currently studying abroad in Istanbul, Turkey. The studio arts and anthropology double major in the College of Arts and Sciences is fluent in German and speaks basic Turkish. Thompson has made the most of her study abroad opportunities: She spent part of 2012 in Berlin, Germany, and attended Boğaziçi University in Istanbul, Turkey, this year.

“I am grateful for the opportunity to learn from my community in Turkey and bring that wisdom back to my community in Louisville,” Thompson said. “I am looking forward to pursuing academic and artistic interests relating to textile workers in Kayseri.”

Thompson brings to 79 the number of Fulbright scholars at UofL since 2003, more than any other Kentucky university and on par with some of the nation’s most prestigious institutions. UofL announced its top scholars in May.