Sidney Edwards, a teaching assistant earning her MFA in performance, was tapped to reenact the role of an enslaved distiller for visitors at the newly erected distillery site at Locust Grove, in Louisville, KY. Her job is also to help craft the character and storyline for the role she’ll be playing. 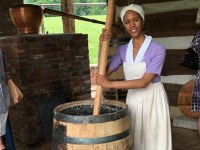 Research reveals some 200 years ago, enslaved African American women likely would have tended a distillery at Locust Grove, one of Louisville’s largest, most significant historical sites.

Sidney Edwards, a teaching assistant earning her MFA in performance, was tapped to reenact the role of an enslaved distiller for visitors at the newly erected distillery site. Her job is also to help craft the character and storyline for the role she’ll be playing.

It’s no easy task. There are few records of the 35 to 40 enslaved African Americans who lived at Locust Grove and none left in their own words.

“Slaves were the majority of the people who lived here 200 years ago. But it’s more challenging to recreate their experience than the owners of the farm because the owners left behind letters that tell of their perspective,” said Brian Cushing, Locust Grove Program Director, in a recent Voice-Tribune story. “We’re trying to respectfully and authentically bring the characters of the enslaved African Americans who lived and worked at Locust Grove to life in the same way that we do other characters from the site’s history.”

To prepare, Edwards learned the distilling process, read letters from Locust Grove owners’ and reviewed an inventory of slaves which described them only by name, age and duty. She said she’ll ultimately create a composite character culled from her broader research.

Storytelling about slavery is “touchy, you have to approach it carefully,” she said. “Many people, black or white, seem to prefer to avoid it.”

She’s appreciative of the opportunity to represent African Americans in such a context to help educate people.

“No matter how hard a thing it is to do, it’s still an important thing to do,” she said. “Children and people should know that slavery was a part of our American history. I like being a representative in that way.”

Department Chair Nefertiti Burton, whose teaching, directing, writing and storytelling focus on people of the African diaspora, offered some thoughts on involving students in the reenactment.

“I explained it would not be appealing or interesting to an African American to perform the role of an enslaved character that is marginal to the main action. The character must be central to the story, not peripheral,” Burton said. “Also the actor must have the freedom to create stories that actually represent the enslaved people’s lives and feelings, and not some made up, soft pedaling of what it meant to be enslaved.”

Edwards, who also teaches at Kentucky Shakespeare’s camp, is playing the lead role in the African American Theatre Program’s production of “Baltimore,” which was selected for the National Black Theatre Festival July 31–Aug. 5.

She earned her BFA in musical theatre from William Peace University in North Carolina and chose to come to UofL for graduate studies as Theatre Arts offers the only Graduate Certificate in African American Theatre in the country.

“Both heritage and theatre is very important to me,” she said.