UofL offensive lineman Pedro Sibiea became the first-ever football player to participate in the three-week A&S study abroad trip in Panama through the Departments of Latin American and Latino Studies and Communication. This article by ESPN Staff Writer Andrea Adelson profiles SIbiea’s time there and discusses how athletes can take advantage of programs like these, in addition to sports and traditional academics. 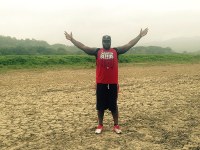 Pedro Sibiea has never been shy about traveling or meeting new people. Studying abroad in college always appealed to him, but with football consuming so much of his time, he never thought it possible.

Until he decided one day to ask.

Shortly before the bowl game, Sibiea met with his academic advisor and told her, "It would be nice if I studied abroad." She told him to start doing the research. He found a program in Panama for three weeks in May that fit his schedule and college requirements.

"Pedro and I talked about how maybe he could start a trend to get more athletes interested," said Al Futrell, chair of the Louisville department of communication and one of the leaders of the trip. "A lot of times maybe athletes are shy and afraid to do it, but Pedro had a good time. He got a great deal out of it. A trip like this opens their eyes to so many things. He was surprised by how much of an effect it had on him."