Shakespeare & the Creation of the Modern World 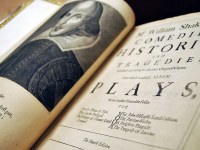 Today you more often hear about Star Trek than Shakespeare. But the Bard left an indelible mark not only on Captain Kirk and his crew – from a plot including three chanting witches to dialogue written in sonnet form – but on the entire modern era, most evidently in our language and culture. Romeo, Juliet, Hamlet – they are not only characters in a play they are cultural archetypes on which countless books, movies, and songs have been based.

Prof. Julia Dietrich (English) will illuminate that ways that Shakespeare’s work helped to create the modern era in a five-week, Tuesday-night short course on Shakespeare’s “greatest hits,” and their eternal themes at the Louisville Free Public Library.

“We will consider the ways in which Shakespeare’s plays contributed to the transition from medieval to modern culture,” Prof. Dietrich said. “After considering Shakespeare’s stage and his language, we will read a sample of Shakespeare’s comedies and tragedies and pay particular attention to their vision of a good life, of the meaning of love, and of why things happen as they do.”

Researching medieval literature and culture, and teaching Shakespeare for more than three decades, Prof. Dietrich’s current research focuses on medieval rhetoric, specifically in argumentation. She published Knowledge and Virtue in the Regula Pastoralis of Gregory the Great:  The Development of Argumentation for the Late Sixth Century, in the Journal of Late Antiquity last year.

The upcoming public course at the library will focus on Shakespeare’s popular works, including Romeo and Juliet, Twelfth Night, and Hamlet – Prof. Dietrich’s favorite.

“Hamlet is not only simply spectacular, it gives us action that really seems poised between the medieval and modern worlds,” Prof. Dietrich said. “And a hero who has to decide whether he is a medieval or modern man.”

The course will be held from 6:30 to 8pm on Oct. 18 and 25, and November 1, 8, and 15. It is free and open to the public, but registration is required by calling 502-574-1623. The course concludes with a trip to the Frazier History Museum to view Shakespeare's First Folio (on display Nov. 10 - Dec. 10). For more information visit, LFPL Short Course on Shakespeare. For information on other Will in the Ville events coinciding with the exhibition of Shakespeare’s First Folio, visit Will in the Ville.