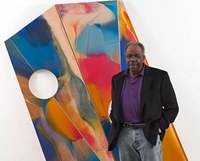 Now, “at long last,” according to the New York Times, the 85-year-old painter has his work on display in a New York City gallery. His partnership with Pace Gallery marks the first time his work has been represented by a gallery in New York, perhaps surprising considering he is regarded as one of the most important and inventive colorists from the last 30 years.

Much of Gilliam’s career has been spent in Washington, DC. In 1972, he became the first black artist to represent the United States at the Venice Biennale. In 2012, Gilliam signed a deal with Los Angeles-based art dealer David Kordansky, which brought in large-scale auction deals for the painter. His “forth” painting, for example, sold for $1.16 million at Sotheby’s London last year.

Why did it take so long for Gilliam’s work to be showcased in one of the world’s most important cities for artists? Arne Glimcher, founder of Pace Gallery, told the New York Times that Gilliam steered his career clear of “what we know is the art market.”

“He’s had many, many opportunities,” Glimcher said in the article. “He didn’t want it and I think, I hope, it was that he was waiting for the right moment to show his work in broader venues.”

Glimcher added that the Pace Gallery partnership should provide Gilliam with more exposure at an international level.

Just because Gilliam’s work is making its New York City gallery debut, however, doesn’t mean it hasn’t earned widespread admiration. In fact, Gilliam has created dozens of public art pieces, some of which can be found in Detroit, New York, Atlanta, San Francisco and Boston. His work is in the permanent collections of 56 museums including the Metropolitan Museum of Art, the Museum of Modern Art (New York), the Whitney Museum of American Art, the National Gallery of Art, the National Museum of American Art, the Art Institute of Chicago, the Corcoran Gallery, the Hirshhorn Museum and Louisville’s own Speed Art Museum.

After receiving his master’s from UofL in the early 60s, Gilliam moved on to teach at a number of universities, including the Maryland Institute of Art and Carnegie Mellon University. He retired from teaching in 1989 and began operating a studio in a historic district in Washington, D.C.

Gilliam’s star began ascending in the late 1960s with his own unique approach to “painting as object” so that color is structured by the form of the canvas itself. The sculptural effects he achieved with this technique gave him national repute, and his work has found audiences worldwide.

Gilliam’s professional honors include honorary doctorates from eight universities, the Kentucky Governor’s Award in the Arts, several National Endowment for the Arts grants, the Longview Foundation Award, a Guggenheim Fellowship, the Art Institute of Chicago’s Norman W. Harris Prize, and an Artist’s Fellowship from the Washington Gallery of Modern Art. In 2006, he was named the University of Louisville’s Alumnus of the Year. Gilliam was inducted in the College of Arts & Sciences Hall of Honor in 2007.