Dr. Rhodebeck’s research in Political Science involves poring over data and finding the patterns that illuminate political history. Her primary focus has been around gay rights issues in elections. Her research found that the pattern of policy voting reflected the particular gay rights issue that was important in an election – e.g. gays in the military in 1992 and same-sex marriage in 2004. 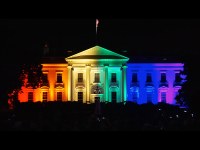 Dr. Laurie Rhodebeck may be related to former President Warren Harding, but her policy ideals align more closely with those of current President Barack Obama. Though slightly embarrassed of her blood relative’s scandalous presidency, she would nevertheless invite him to dinner, along with Obama, for his history-making contribution as the United States’ first African-American president and for his political wisdom, and former President Theodore Roosevelt, for his efforts in natural conservation and for the adventures he would regale her with from appetizers through dessert.

A self-professed nerd at heart, who especially enjoys poring over data and finding the patterns that illuminate political history, Rhodebeck’s latest study, “Another Issue Comes Out: Gay Rights Policy Voting in Recent U.S. Presidential Elections,” published in the Journal of Homosexuality in 2015, analyzed political convention platform statements and candidates’ acceptance speeches to evaluate the clarity of their positions on several gay rights issues. She then analyzed the content of New York Times coverage of gay rights issues during each of the six election years to assess the accuracy of reporting on the candidates’ positions.

Based on these two analyses, Dr. Rhodebeck formulated hypotheses about the likely impact of voters’ gay rights opinions on their candidate preferences, while also taking into account the many other factors that influence vote choice. Gay rights policy voting occurred in all the elections except 1988, when gay rights issues were not part of the campaign discussion.

Dr. Rhodebeck’s research found that the pattern of policy voting reflected the particular gay rights issue that was important in an election – e.g. gays in the military in 1992 and same-sex marriage in 2004.

Why did you choose this subject to research, and why is this topic of value in academics? Outside academia?

Dr. Rhodebeck: I became interested in the electoral role of gay rights issues during the 1992 presidential election, an election that featured a number of “culture war” issues. Much of the political science research on voter behavior in presidential elections focuses on perceptions of the economy or opinions about foreign policy.

I wanted to shift the focus to include cultural (also called social) issues. It was clear from journalistic accounts that gay rights issues had begun to play a role in electoral politics in the early 1990s, but political science denied their importance until much more recently.

Many a reviewer and editor rejected my claim that gay rights issues are electorally important. Fortunately, there’s a greater appreciation now for the topic.

What light does your research on past elections shed on the positions the current candidates are taking on social issues – particularly gay rights – or lack thereof? How and Why?

Dr. Rhodebeck: Some gay rights issues are now legally settled. There’s no longer debate over whether to continue with the “don’t ask, don’t tell” policy, and the Supreme Court allowed for same-sex marriage in Obergefell v. Hodges.

But, conservative GOP candidates sometimes express disagreement with these policy outcomes, mostly as a way to signal their opposition to various gay rights or to indicate their support for religious actors who believe that gay rights policies threaten their religious liberty.

In national politics, such as this year’s presidential election, gay rights is unlikely to be a major policy issue. At the state level, where such gay rights policies as employment nondiscrimination and same-sex couple adoption attract attention, we may see more debate that could influence policy voting for gubernatorial candidates, state legislative candidates, or judicial candidates.

How are the current presidential candidates using values to impact public opinion? Does it differ than the ways candidates did between 1992 and 2008, and how?

Dr. Rhodebeck: There’s been both change and lack of change. The Democrats have always emphasized the value of equal rights when they discuss their positions on gay rights issues. The Republicans have long used the value of moral traditionalism, but recently this has begun to change.

Now, Republicans are more likely to talk about religious liberty, a value that suggests religiously oriented people have a right to protect their beliefs from groups whose behavior is perceived as violating religious norms.

What is your opinion of the race for the presidential nomination in terms of the ways the candidates are using social issues to generate public support?

Dr. Rhodebeck: The most prominent social issue in the 2016 presidential election is immigration. Clearly, Trump and most of the GOP candidates who dropped out of the race have gotten considerable mileage from this issue. The GOP base, and no small number of conservative, working class Democrats have been attracted to candidates like Trump, who have promised to tighten up the flow of immigrants, keep entire groups out of the United States, or send immigrants already here back to their home countries.

As the liberal voices on immigration, Sanders and Clinton have offered policies that appeal to their more tolerant base of voters.

Abortion, another social issue, has played some role in the election, on both sides of the partisan divide. Like immigration, each side has staked out positions that reflect the preferences of their supporters – i.e. liberal positions for the Democrats, conservative positions for the Republicans.

Gun control is sometimes described as a social issue. Again, the candidates on each side have taken positions that are in keeping with the opinions of their party’s base.

Compared to immigration, abortion, and gun control, gay rights has not played nearly as prominent a role in the campaign thus far.