The Theatre Arts department is celebrating the Repertory Company’s 40 years of success and raising funds to support the program with an event from 6-8 p.m. June 18, at the Kentucky Center for African American Heritage. Each year, a troupe of graduate students from University of Louisville’s Theatre Arts Department travels to dozens of area schools and performs plays from their repertory. 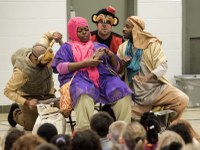 Each year, a troupe of graduate students from University of Louisville’s Theatre Arts Department travels to dozens of area schools and performs plays from their repertory.

“They transform from student actors to characters right before the children’s eyes,” said Bert Harris, retired theater professor, who started the program in 1975. “It opens children up to theater, often for the first time, and hopefully a lifelong interest is born.”

Throughout the last four decades, the Repertory Company has become one of the most visible aspects of the Theatre Arts Department, having performed for more than 150,000 people, mostly local school children.

The department is celebrating the company’s more than 40 years of success and raising funds to support the program with an event from 6-8 p.m. June 18, at the Kentucky Center for African American Heritage, 1701 W. Muhammad Ali Blvd.

The company hopes to raise enough money to purchase a van for transporting performers.

“Currently, the students use their own cars, which presents challenges. Sometimes there’s not enough room to transport all the actors and the costumes,” said Nefertiti Burton, department chair. “We want to make it easier for them. And, we want to recognize and appreciate the tremendous impact the company has had in our community.”

“Zan has been a real support to our program,” Burton said. “As graduate students, all the students in the Rep Company are required to take her class. She’s been instrumental in their training. We wanted to lift that up and celebrate her for her contributions to the department.”

Burton said the award was also an opportunity to recognize Friedlander, a well-known figure in Louisville’s theater world, who earned the first masters degree in Theatre Arts given by UofL.

As an undergraduate, Friedlander frequently performed at the Playhouse (in its original location where Ekstrom Library now stands) and was also in the original cast of “The Stephen Foster Story” in 1966. She’s performed with Actors Theatre of Louisville, the Louisville Ballet, Kentucky Opera Association and Louisville Children’s Theatre. She’s taught Theatre Arts at UofL and developed a small endowment for the department. Notably, Friedlander recorded more than 2,000 titles during her 50-year career at American Printing House for the Blind, and lent her voice to hundreds of other recordings.

“We’re very proud of her and the work she’s done,” Burton said.

The Repertory Company’s performances are offered at minimal cost for any non-profits but are most often performed at elementary schools. The plays focus on social justice, character-building, cultural diversity and inclusion and have accompanying study guides that integrate into school curricula.

The company offers four paid assistantships for UofL students. There have been more than 115 members and many are now working throughout the nation as theater professionals.

The company only charges the cost of gas for travel. The service is supported by the university, College of Arts and Sciences and the Theatre Arts Department.

“This work is offered at such a discounted fee as a way for Theatre Arts to serve our community,” Burton said. “We believe in the art of theater and the power it can have to reach children and unlock their imaginations. We want to see the arts continue to grow in our community and we know that art is expensive to bring to schools where artistic funding is in jeopardy or has been eliminated.”

Tickets for the anniversary celebration on June 18 are $40 and include hors d’oeuvres and dinner by Ladyfingers Catering, music by Joe DeBow and a dance performance by Safiyyah Dance Company. There also will be a silent auction and sponsorship opportunities. The public is encouraged to register here.