Meet Ms. and Mr. Cardinal 2016, Amanda Allen and Kevin Grout, and hear them talk about their UofL experiences. 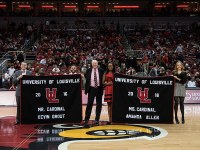 Amanda is a Political Science and Communications major from Louisville, Kentucky. She is a 2015 Truman Scholar, one of only 58 students nationwide to receive a 2015 Harry S. Truman Foundation Scholarship this year. The $30,000 award goes to scholars with a record of leadership and community involvement who plan to pursue careers in public service. Allen will use the scholarship to seek dual graduate degrees in law and education.

Kevin is a History and Political Science major from Florence, Kentucky. He is a McConnell Scholar (Class of 2016), Political Coordinator for the Student Government Association treasurer for the Kentucky Federation of College Republicans, an Intercollegiate Studies Institute Honors Fellow (2015-2016), a member of the Kappa Sigma Fraternity, a Cardinal Host, vice president of the Harlan Scholars Program, and a member of the University Library Advisory Board.

Hear them talk about their UofL experience.