Discovering the Meaning of Life

How do we build a life worth living? For Prof. Avery Kolers (Philosophy), games, and playing them, provide substantial answers. Kolers’ latest paper, “The Grasshopper’s Error: Or, On How Life is a Game,” published in Dialogue in 2015, takes the lead from fellow philosopher Bernard Suits to explain how the meaning or value of life is a lot like the meaning or value of a game. Though they are arbitrary in one sense – they have value only because you decide to play – they matter a lot while we're playing them. They give meaning and importance to the silliest things, like hitting a small ball into a little hole 300 yards away. They engage us mentally, physically, and socially. They imbue our actions with value. They can be played better and worse, and whether we are better or worse at them isn't subjective. 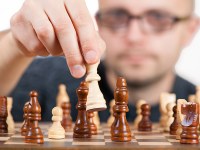 Tell me about your 2015 paper, “The Grasshopper’s Error: Or, On How Life is a Game,” published in Dialogue. Ever since Socrates said "The unexamined life is not worth living," philosophers have been trying to identify and explain the meaning of life and how to live the best life we can. Many of the views on this question – including Socrates' famous dictum – make reference to supposedly objective values whose power is not universally agreed upon. (Frankly, on its face, it's not that plausible that "the examined life" is the only life worth living; or if it is, why that would be.)

But if we're not willing to accept that the meaning or value of life rests in a particular controversial value, where can we find it? We might say that just any life is as good as any other, but that also seems problematic. First, it is no less controversial than any other value claim. (It implies: "Composing Beethoven's symphonies is no better or worse than counting blades of grass all day, every day." That's a controversial value judgment, to say the least.)

Second, although particular values are controversial, much less controversial is the idea that persons should have integrity, character, should stand for something and be committed to things, and so on. In other words, even if we might not want to say exactly which values matter, we also don't want to say that nothing at all matters. We want what matters to be self-determined in some way – not imposed by Socrates or anyone else – but we think that there are better and worse ways to self-determine one's own values. Moreover, it may be that even if there is no one thing that is right for us independent of our self-determination, there are better and worse ways to pursue the values that we choose, and we can go wrong in our pursuit of them.

So there are two ways, at least, to go right or wrong: we can (i) endorse values that are better or worse for us, and we can (ii) pursue values in ways that are better and worse at achieving or exhibiting the chosen values.

For example, suppose I love baseball and you love opera. So (i) it's right for me to devote myself to baseball and right for you to devote yourself to opera. So then (ii) you develop your knowledge of music theory, your singing voice, your acting ability, etc. So far so good. But then I do the very same things – in the name of (i) baseball, I (ii) take opera classes. This would be, objectively speaking, a mistake, because opera classes will not make me a better baseball player. So even if I determine what's valuable for me, there are still objective criteria for the successful pursuit of that value.

It turns out that the meaning or value of life, then, is a lot like the meaning or value of a game. Following the great philosopher Bernard Suits, to play a game is to voluntarily attempt to overcome unnecessary obstacles. Now the thing about games is that they are arbitrary in one sense – they have value only because you decide to play – and yet they matter a lot while we're playing them. They give meaning and importance to the silliest things, like hitting a small ball into a little hole 300 yards away. They engage us mentally, physically, and socially. They imbue our actions with value. They can be played better and worse, and whether we are better or worse at them isn't subjective.

So the hypothesis of my paper, The Grasshopper’s Error: Or, On How Life is a Game, is that the best life is a life that is played as a game – but not just any kind of game, a game with specific rules. Most importantly, it is an open game – a game that doesn't end with a win or loss, but whose objective is continuation. It is a multiplayer role-playing game – a game where our principal task is to inhabit roles that enable other 'players' to perform their roles better (e.g., professor-student – two roles that, when well played, each enable the other to be done better). And it can be the best game it is only if it meets a key criterion: every person involved must also be a player; no using people as props. But otherwise, just play the best game you can.

I think, with those requirements, we can understand how the best life embodies values that are both subjective and objective. Most fundamentally, we choose our aims and values somewhat arbitrarily. But once we have chosen some object, there are objectively more and less effective ways to pursue it. That's the basic thesis of the paper.

Anyone can adopt or adapt the findings here. Game designer Jane McGonigal has recently argued (in her amazing and highly readable book Reality is Broken) that if we think in terms of social multiplayer reality-altering games, we can address our greatest problems, including seemingly intractable ones like global warming. She pretty convincingly uses examples like the Halo series and World of Warcraft to show that people will come together by the millions, across lines of politics, race, class, gender, national boundaries, etc., to solve problems together. She gives examples of games she has designed that have engaged people in developing creative fixes for serious global problems – not just online pretend problems.

That said, there is also a trend of 'gamification' that has hit the business world (and likely the health benefits of everyone with employer-paid insurance!), and while 'gamification' has a place, it's also risky. Games are not games if they are not voluntary. To be sure, the exact line between voluntary and involuntary is sometimes hard to chart, but if games are not voluntary than they violate the fundamental rule of good gamecraft, namely that all persons be players, not props. Players will experience the unnecessary obstacles as so many hoops they have to jump through, rather than as essential.

Philosophical work on the meaning and value of life – going back to Socrates, again – has often circled around the appropriate balance among objective values, subjective valuing, and long-term impact. In one respect, long-term impact is the kicker, because in the long run, we're all dead. Literally, all of us – if not when the sun swallows up the Earth, then when the species goes extinct. So even if we have an impact on the next generation our impact is nowhere close to long-term. Everything we could possibly value will eventually disappear. So if life is to be meaningful for us we have to embrace the arbitrariness and fleetingness of ourselves, our loved ones, and all that we value. Buddhism is in a sense built around this idea, but western traditions have rather denied it than embraced it. I think the idea of life as a game is a way to embrace this, to be okay with the fact that all will eventually be lost. Even the best games eventually end. Indeed, their time-limitedness is often essential to their value.

Beyond games, my recent research (including that reflected in my 2016 book A Moral Theory of Solidarity) is about working together and valuing others as ends in themselves, which is the moral core of the Kantian tradition. Solidarity is most often justified by appeal to the justice or goals that we hope to bring about. But I reject this view, because these are uncertain and fleeting at best, and anyway, we might disagree on the goals or on how to pursue them. The better justification of solidarity with others is thus not in achieving justice but in treating people justly. When people call on us for solidarity we answer their call as a way of treating them equitably or justly. Although I don't develop the "game" link in the book, I think the two dovetail in this core idea that people are players, not props.

Too often, especially in politics and economics, we treat others as obstacles to be gotten around by any means available, rather than as participants in a shared endeavor.

If you could have dinner with three philosophers, living or dead, who would they be, and why?
Three philosophers living or dead... an impossible question, like asking for my top 5 Bob Dylan songs. But I think at this moment I would go for Ivan Illich, the Bulgarian-Mexican Jesuit who wrote Tools for Conviviality and De-Schooling Society; Bartolomé de las Casas, the great Spanish Dominican who started out life as a conquistador himself, but spent his last decades fighting for the liberation of American Indians from Spanish tyranny, and was the first European voice against the transatlantic slave trade; and Emma Goldman, who was a trenchant critic and opponent of gilded-age inequality and who said "If I can't dance, it's not my revolution!"

What sparked your interest in Philosophy?
Personally I got interested in philosophy because my first philosophy class (Intro to Ethics) was the hardest course I took in my first two years of college so I decided I had to major in it so as to really master it. Of course, I have still not mastered it, so I have to keep at it.

More than any other single work, it was John Rawls's A Theory of Justice that molded my career in political philosophy. For the first 15 or so years after that was published, it monopolized the debate; but in the past 30 years or so there has been an amazing flowering of philosophical engagement with a huge array of questions descended from, but also sharply distinct from, Rawls's work. His work spurred an explosion of creativity in political philosophy.

Who or what inspires you?
Who or what inspires me... justice, I guess. Sounds hokey. A better answer might be: the feeling and challenge of working together with others in solidarity. The intellectual and social challenge involved in treating every person as a player, not a prop, and insisting on being treated that way by them, as well; the prospect of 'moving the ball forward' for our descendants. I'm hopeful that we can do this. But I'm afraid, too; if we leave our kids to clean up our messes, they will be right to condemn us for it Find out more about the Philosophy Department in the College of Arts and Sciences.