Prof. Tim Dowling (Physics & Astronomy) on the Juno mission and its effect on his research. Juno, a NASA space probe that began orbiting the planet Jupiter on July 4, will improve our understanding of the solar system's beginnings by revealing the origin and evolution of planet. 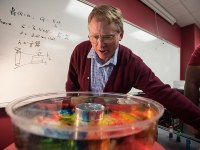 After a five year and two-billion mile journey through space,NASA’s Juno spacecraft sent its probe into Jupiter’s orbit in July. And here on Earth, we got an unprecedented front-row view of our solar system’s largest planet.

“Juno’s results will be akin to taking an MRI of the inside of Jupiter,” said Prof. Tim Dowling (Physics & Astronomy). “It is so exciting to have a big mission to Jupiter, and I’ve actually got some skin in the game – the structure discerned by Juno will make or break my prediction about the deep jets on Jupiter.”

Prof. Dowling’s early career work focused on Jupiter’s atmosphere, specifically jet streams. His research produced the result that Jupiter’s jet streams must be quite deep, and that eastward jets increase in strength as they get deeper, which contradicts the common wisdom that jets get weaker with depth.

“This prediction has waited more than two decades to be tested,” Prof. Dowling said.

His research has gone on to explore jet-stream stability on Saturn, and most recently Earth and Mars. Prof. Dowling’s next project will study the Antarctic Circumpolar Current (ACC). He will analyze the same vorticity-stream function correlations he studied on Earth in 2015 and on Mars in 2016 with Prof. Jian Du-Caines (Physics & Astronomy), Prof. Beth Bradley (Mathematics), and research partners in England.

“Early indications are the ACC is very Jupiter-like in the details of how it behaves, but we shall see,” he said. “It is always exciting to venture into new territory, literally.”

Prof. Dowling discusses the Juno probe and his 30 year old theory about Jupiter’s atmosphere on UofL Today with Mark Hebert.

Fly along with NASA's Juno spacecraft at Jupiter in this video by NASA. Turn on your sound to find out more about the planet, the mission and the spacecraft. For more information on astronomy research in the Physics and Astronomy Department of the College of Arts & Sciences, visit UofL Physics Research.