A New Year and a New Look 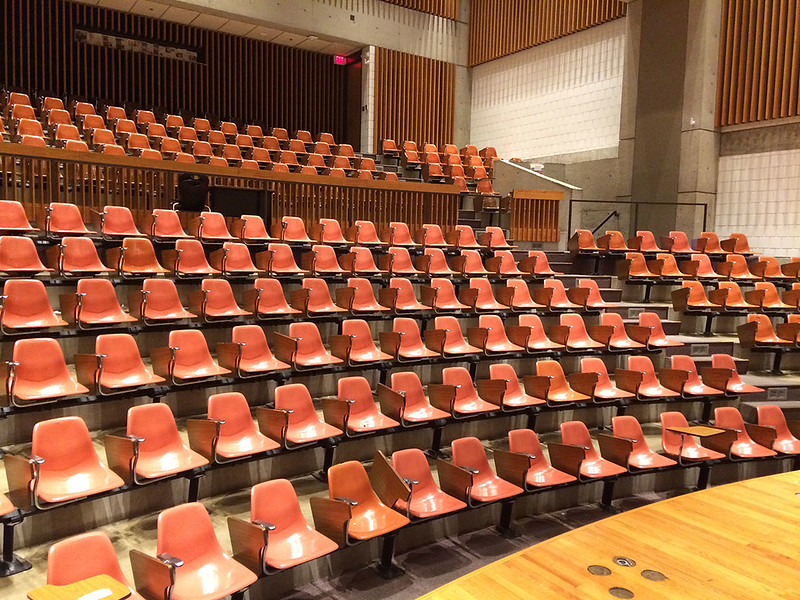 But 21st century students are immune to disco fever, and their smartphones and laptops take up considerably more space than a Steno pad. In the College of Arts & Sciences auditoriums and lecture halls, more than chairs needed an upgrade.

This summer UofL’s Central Administration and Arts & Sciences Dean Kimberly Kempf-Leonard combined funding to renovate nine auditoriums, one classroom, and the Davidson lobby and Strickler hallway. With a budget of $1.5 million, seating and flooring were replaced, electrical was updated, and everything got a fresh coat of paint.

Seven of the largest Arts & Sciences lecture halls, which hadn’t been updated in earnest since 2001, were furnished with technology updates. In the past, pieces were replaced as failures occurred. These updates bring the rooms up to modern standards. The rooms are now capable of supporting digital media in full high-definition, the audio systems deliver crisp, clean sound with no distortion and consistent coverage throughout the room, and all the rooms are equipped with high-definition projectors, new computer systems, Blu-Ray disc players, and new cabinetry.

Replacing the small, outdated tablet-arm desks in four auditoriums is table-top, swing-arm seating that allows students to use books, notepads and laptops, and the seating in Strickler 102 and Davidson Lobby now also include 120v and USB power outlets for students.

“To recruit great students, the classrooms need to look professional and modern,” said UofL student Joseph Clark. “It shows that the administration cares about your learning environment.

“And I don’t have to worry about finding a desk that’s not broken.”

In addition, the newly renovated auditoriums and classroom incorporated current Americans with Disabilities Act (ADA) standards into the seating layout.

Humanities 100 and Strickler 102 also feature Smart Podium technology allowing the faculty to annotate directly from touch panel monitors to emphasize key points in their presentations. Life Sciences 101 features two 65” flat panel TVs that mirror the content being shown on the projector and allow those sitting at the back of the room to better see the presentations on the main screen.

Arts & Sciences Facilities Manager Rick Taylor oversaw the renovations, the majority of which were completed by UofL’s Physical Plant. The renovations were not publicized as they were occurring, and for many who returned after summer break, the updated auditoriums were a surprise.

In August when Prof. Ross stepped into Strickler 102 at the start of another fall semester, she teared up, and this time it wasn’t because she faced another year staring at those orange seats.

“Now the auditorium looks sophisticated and professional; it feels different,” she said. “I’m really glad the improvements to the physical campus filtered down to the classroom.

“People do judge books by their color, and this gives the feeling that UofL is a first-class institution.”