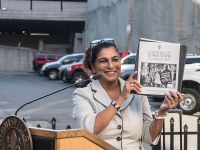 The Louisville Downtown Civil Rights Trail Markers Project was the vision of J. Blaine Hudson, former dean of the University of Louisville College of Arts and Sciences. He sought to preserve the history, heritage and contributions of African Americans to Louisville’s rich history. The marker project began when Dean Hudson convened a meeting of university and community leaders to consider ways to commemorate the 50thanniversary of the ordinance’s passage

The University of Louisville’s College of Arts and Sciences, Louisville Metro Council, Louisville Downtown Partnership and Office of Mayor Fischer are project partners.

The ceremony at the “Civil Rights Overview” marker began at Fourth and Guthrie streets. Fourth Street was Louisville’s primary corridor of restaurants, department stores and theaters. Through the 1950s, most white-owned establishments downtown excluded African Americans or treated them differently as customers—for example, denying them the opportunity to try on clothes, to sit at lunch counters and to enter movie theaters. By winter 1961, small-scale demonstrations and efforts to secure legislation opening all such facilities had failed.

The stirrings of protest activity that swept the South in the 1960s inspired African American teenagers who became the “foot soldiers” of the struggle against discrimination in public accommodations in Louisville. Mass student demonstrations in spring 1961, a voter registration drive and a campaign to unseat an unsympathetic mayor and elect a new board of aldermen ultimately led to the passage of the public accommodations ordinance – the first such law in the South.

Today, many businesses that were picketed in the demonstrations have closed, relocated or been torn down. In the absence of a physical presence, these markers will preserve the history of the civil rights movement and tell the little-known story of one of Louisville’s greatest achievements.

Jefferson County Public Schools and Archdiocese of Louisville schools received bound copies of the trail’s teacher resource guides that will be offered to each local school library. Marker trail guides also are available at the Louisville Visitors Center and online at Louisville Downtown Civil Rights Trail.

The markers describe local demonstrations, when black students and adults marched and participated in sit-ins at downtown businesses that refused to serve African Americans. Activists organized a voter registration campaign that led to election of people responsive to their cause and, after more demonstrations, passage of the 1963 public accommodations ordinance to end that practice. The ordinance was considered the first for a southern city, and Louisville received national recognition for peaceful desegregation at that time.

An advisory committee of scholars, historians and sit-in participants suggested the sites for the markers, which were installed since 2013 along South Fourth Street and Broadway locations. Louisville artist Ed Hamilton designed artwork for the markers.