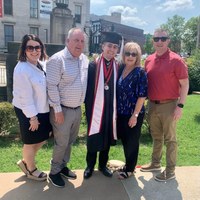 While studying to earn his UofL undergraduate degree in four years in political science with a minor in Russian, Matt Payne (center) also served in the Army National Guard, having joined in 2019.

“This matters to me,” he said. “You don’t need to be a legacy to pull off some great things.”

But tenacity helps, as does the willingness to seek answers from good advisers. Not to mention time management.

While studying to earn his UofL undergraduate degree in four years in political science with a minor in Russian, Payne also served in the Army National Guard, having joined in 2019.

“We made it work. It was a struggle,” Payne said. “Doing ROTC and the National Guard and academics is difficult.”

But the balancing act paid off and he plans to further his educational journey with a graduate or law degree, having an interest in immigration law or even a “dream” of working for the State Department.

Before that, however, he will spend four months working in recruitment at Fort Knox and later will report to Fort Huachuca in southern Arizona to train as a military intelligence officer.

Payne credits some critical internships in political science as good preparation for that intelligence officer role. While working with government officials on Louisville Metro Council and in the Kentucky General Assembly through the Legislative Research Commission, he learned to gather and distill critical information, research issues and present facts and even recommendations to decision-makers to use.

The Louisville native was always intrigued by watching the news and learning about current events, which ultimately led him to the political science department and its faculty members who opened his eyes to career opportunities.

“I always wanted to choose a language that was critical and impactful,” Payne said. Russian, he decided, was “more relevant in the world and underused in the west.”

The combination of major and minor led him to the also timely honors thesis topic about the Russian diaspora, although the swiftly shifting current conflict in Ukraine made it more stressful to write.

He cannot believe the changes in world affairs that have occurred in his time at UofL, especially this last year, and within his National Guard service. “It’s been a heck of a ride.”

A week before his classes started last year, he was in Fort Bragg, North Carolina, when the capital city of Kabul fell and he suddenly was helping a unit prepare to deploy to Afghanistan.

As a Guardsman stateside, he has worked with an engineering battalion and spent the past year supporting the 101st Airborne Division. “I had a blast doing that,” he said. Other assignments have included helping to run COVID-testing centers and polling places.

And Payne’s face is familiar around the American Legion Jeffersontown GI Joe Post 244, where he has volunteered and became a district officer, believing he may be the youngest member in Kentucky. Bolstering such civic organizations is important to society, in his estimation, and he says they need new blood to support them.

Whether it be drawing attention to military service through the veterans work or continuing his Guard tenure, Payne said he hopes to continue building the force.

“I take the most pride in recruiting,” Payne said.