Congratulations to Professor Barbara Perry, the 2014 Alumni Fellow for A&S! 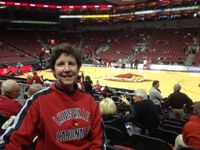 The College of Arts and Sciences is proud to announce that Dr. Barbara A. Perry, Associate Professor of Political Science at the University of Virginia, is this recipient of this year’s Alumni Fellow Award.

She and the other unit’s Alumni Fellows will be honored at a special dinner on October 16, 2014 at the Louisville Marriott Downtown. For information on how to attend, please go to uoflalumni.org.

Dr. Perry is the co-chair of the Miller Center Oral History Program and University of Virginia Associate Professor.  She is a distinguished scholar of the U.S. Supreme Court and the American presidency and is viewed as an authority on the Kennedy Presidency.  Dr. Perry’s book Rose Kennedy: The Life and Times of a Political Matriarch, was released in 2013 and draws from a collection of newly released diaries and letters to reveal the private woman who became a political legend.  She is co-editor of the 2014 book 41: Inside the Presidency of George H.W. Bush.

Dr. Perry earned a B.A. in Political Science from the University of Louisville and continued her education at Oxford (M.A. in Politics, Philosophy and Economics) and the University of Virginia (Ph.D. in American Government).  She served as a judicial fellow at the U.S. Supreme Court (1994-1995), where she received the Tom C. Clark Award as the outstanding fellow. Dr. Perry was the senior fellow at the University of Louisville’s McConnell Center in 2006-07 and now serves as a non-resident fellow at the Center.  She is a frequent media commentator for various outlets including CNN, C-SPAN, MS-NBC, BBC, National Public Radio, Public Radio International, New York Times, Washington Post, and USA Today.

Dr. Perry will present a public talk as part of the A&S All Stars Series entitled "Presidential All-Stars: From the Sports Arena to the White House" on Saturday, October 18th.  For information and tickets, click here.