The legend of Ali will live on far past his death, not least in UofL’s current cohort of Muhammad Ali Scholars, half of whom are from the College of Arts & Sciences. 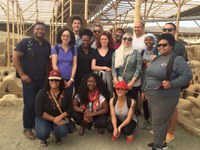 Students fight for social justice at home and around the world

Muhammad Ali inspired many people throughout his life. Charismatic, confident, and committed to his convictions, Ali was much more than the sum of his many identities – a heavy-weight champion, a Muslim, an African-American man, a social justice activist – he was a legend in his own time. The legend of Ali will live on far past his death, not least in UofL’s current cohort of Muhammad Ali Scholars, half of whom are from the College of Arts & Sciences.

“Muhammad Ali fought not just for himself, but others in his position who did not have the opportunity to do so – he threw punches at all the injustices around him, all the while embodying the very essence of compassion,” said Ali Scholar Mariam Ba, a psychological and brain sciences major with a minor in pan-African studies. “The sight of his Janazah [Salat al-Janazah is the Islamic funeral prayer] at his funeral was incredible, he truly transcended religion, creed, race and all the categories we assign to differentiate ourselves. Not a single group within Freedom Hall had sole claim to him.

“He made a spot at the table and fought for those who never would have the chance to make it there, she said. “I think his integrity was not only inspiring, but something this world could use more of.”

Ba became interested in the Ali Scholars program after witnessing the passion for social justice of previous Scholars. Offered to full-time undergraduate University of Louisville students, the program is a unique two-year experience combining training, research and service in the areas of violence prevention, social justice and peacemaking in an urban living context. A special emphasis is placed on understanding and addressing the social conditions that negatively impact an urban environment.

Through their work with the Muhammad Ali Institute, Ali Scholars develop expertise on a topic of their choice by participating in seminars with renowned practitioners, educators and activists. The Ali Scholars employ a practical solution-based approach as they produce scholarly research related to their “expert area” and its impact locally and globally. Through the Ali Scholars program, students acquire both the intellectual and practical training to take action and leadership on issues of peace, violence prevention and social justice at home and abroad.

While she was studying social justice issues in Lima, Peru as part of the Scholars international service-learning, Ba visited La Casita de Panchita, a non-profit center for women and children operated and funded by volunteers. There she not only found the meaning in Ali’s work as an advocate for social justice, but found her purpose doing the same.

“Working in social justice means sometimes all you have are scraps to complete a task as huge as securing and protecting the lives of children,” Ba said. “I think my purpose as a social justice advocate is to know that my place is not to fight anybody's cause for them, but to fight the barriers that drown their voices.

“It is not a burden upon me to ‘liberate’ or ‘free’ anybody, my place as an advocate is to listen to the problems faced by communities and individuals, then join them as they fight rhetoric and systematic push-back.”

Ali Scholar Karen Udoh, who is majoring in biology, was also in Peru on the service-learning trip. Though it’s easy to be overwhelmed by the magnitude of injustice and the work that needs to be done to fight it, Udoh said she too was inspired by Muhammad Ali’s strength in the face of adversity.

“Just like Muhammad Ali, I will fight back and speak out against injustice – it is no longer acceptable to be silent and to settle with the status quo,” she said. “We should denounce the hate and fear people perpetuate and respond with love and compassion for others.”

Udoh became an Ali Scholar so that she could see the world through the lens of social justice, and more concretely, so that she would be equipped to start community-based initiatives that address inequities in Ali’s hometown, Louisville.

“We have to stop the violence that is constantly plaguing our communities instead of turning a blind eye to them,” she said.

The skills the Ali Scholars gain through the program, and through their education in the College of arts & Sciences – leadership, community organizing, project development, critical thinking – provide them with the ability to be the next generation that fights against the inequity and injustice faced by people around the world. It is an opportunity to be a part of something greater than themselves, a chance to challenge their thinking, and a means to walk in the footsteps of Muhammad Ali.

And Ba said, “Who wouldn’t take the opportunity to walk that path?”