College of Arts & Sciences junior Hannah Wilson (Political Science, Women’s & Gender Studies, and Philosophy) has earned a Truman Scholarship, a prominent award given to just 54 U.S. college students this year and valued at $30,000. She is Kentucky’s only 2016 Truman Scholar. 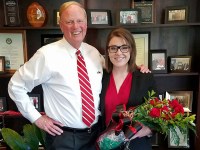 College of Arts & Sciences junior Hannah Wilson (Political Science, Women’s & Gender Studies, and Philosophy) has earned a Truman Scholarship, a prominent award given to just 54 U.S. college students this year and valued at $30,000. She is Kentucky’s only 2016 Truman Scholar.

Wilson credits her A&S mentors and professors for their invaluable support, guidance, and encouragement through the application process.

“Undoubtedly, much of my success is credited to these amazing people and others too numerous to name individually."

Wilson expects to graduate in May 2017. A Bradfordsville, Ky., native and McConnell Scholar, she intends to use her scholarship to earn graduate degrees at University of California Berkeley School of Law in preparation for a career in civil rights. She said that college’s program will enable her to earn combined law and doctoral degrees in five years.

“I’m honored to be a Truman Scholar and I look forward to seizing the opportunities made available to me by the foundation in pursuit of a lifetime of public service,” said Wilson. “It is especially a privilege to represent the rural, central Kentucky community of which I am a product in my acceptance of this award.”

Wilson is the daughter of Cindy and Todd Wilson of Bradfordsville. She graduated from Marion County High School in 2013 and was the school’s senior class president.

The Harry S. Truman Scholarship Foundation announced the 2016 winners yesterday. The prize recognizes college juniors with a record of outstanding leadership and community involvement who want to pursue careers in public service. The winners will receive their awards in a May 29 ceremony at the Harry S. Truman Presidential Library and Museum, Independence, Mo.

“We in the College are so proud to call Ms. Allen one of our own,” says Kimberly Kempf-Leonard, Dean of the College of Arts & Sciences. “She embodies the ideals of a liberal arts education, and her success demonstrates the relevance of a degree in the arts and sciences in today’s diverse and rapidly changing world. Without a doubt, Ms. Allen will make an indelible mark as a public servant, as she has learned how to be a critical thinker and creative problem-solver. Also significantly, she is able to include ethical considerations in her decision-making and understands the importance of experiencing the world from perspectives other than her own.”

UofL President James Ramsey states, “Hannah has certainly earned this honor. She exemplifies ambition, academic excellence, leadership and a passion for justice and I am certain that she will emerge as a leader of her generation.”

“During her time at UofL, Hannah has wisely leveraged leadership and community service opportunities—especially through her McConnell Scholarship. The Truman Scholarship is an ideal next step for her,” Condon said.

Twelve UofL students have been Truman Scholars since 1977, the year the national program was launched.