I want to begin by recognizing and celebrating Dr. Sherri Wallace (pictured below) for her Lifetime Achievement Award from the American Political Science Association’s (APSA) education section during its annual meeting in Montreal, Quebec, last week. A professor of Political Science and Interim Associate Dean for DECC (Diversity, Engagement, Culture, and Climate), Sherri also served as Conference Program Co-Chair for the APSA’s 2022 annual meeting, attended by more than 6,000 scholars. A longtime member of the education division of 500+ members, Sherri has served in many capacities for the organization. Congratulations, Sherri, on this outstanding honor from your Political Science colleagues!

A key member of the Business Center, Juli Wagner, Unit Business Manager Senior, is retiring after 38 years at UofL. Juli’s deep institutional knowledge and incredible work ethic will be difficult to replace, but what I will especially miss is her commitment to our students. In meetings, Juli always advocates for how we can best support students, and the College has done a better job of fulfilling its mission to them because of her. Juli’s last day is September 27: please join me in wishing her a happy and fulfilling retirement! 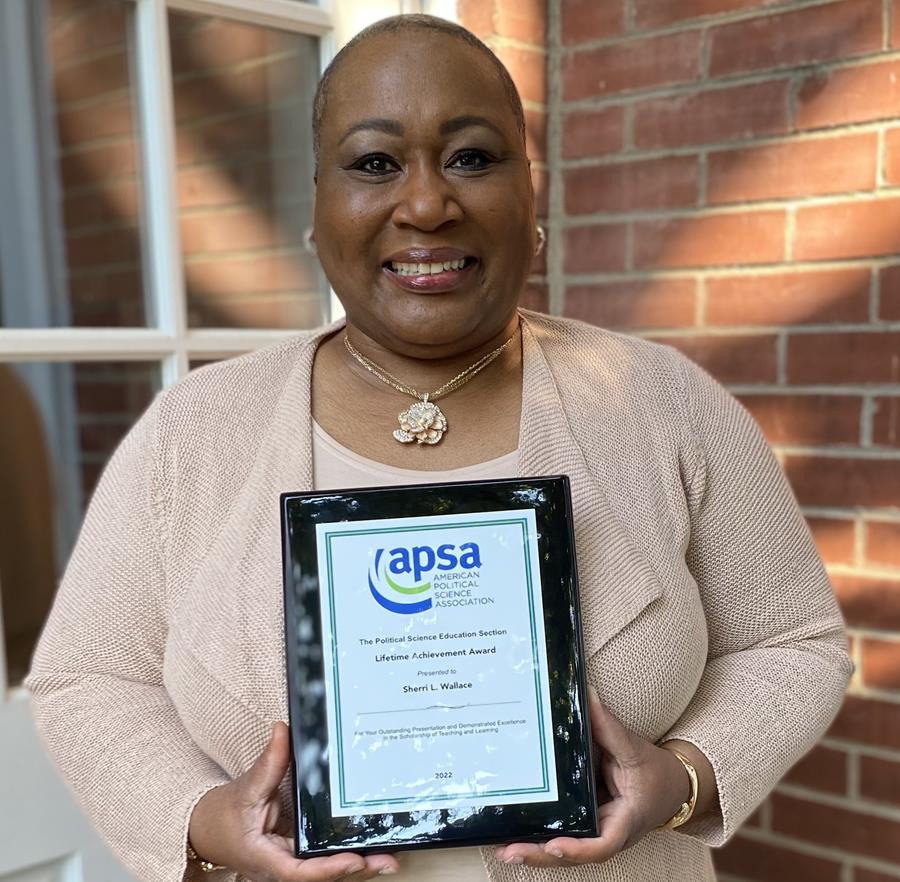 In collaboration with Novartis Pharmaceuticals, Sachin Handa, associate professor of organic chemistry, Pawel Kozlowski, professor of chemistry, Jacek Jasinski, research scientist, Conn Center for Renewable Energy, and research colleagues are co-authors whose research, "sustainable organic chemistry in water for a greener planet," was published in the high-impact journal “Advanced Functional Materials," as well as highlighted on the inside front cover of the journal. Handa's and Kozlowski's groups developed photoactive nanomaterial containing ppm level micellar copper catalysts to solve problems in a single package with sustainability a key factor.

A team of researchers from the Departments of Biology and Psychological and Brain Sciences investigated racial bias in the automated proctoring software known as Respondus Lockdown Browser with Monitor.  The study, authored by Deborah Yoder-Himes, Alina Asif, Kaelin Kinney, Tiffany Brandt, Rhiannon Cecil, Paul Himes, Cara Cashon, Rachel Hopp, and Edna Ross, was recently published in Frontiers in Education. Major conclusions from the study were:

The A&S team are hoping this will encourage Respondus to continue to improve their product. Read more.

Just in time for Halloween, a Louisville-based author is opening a bookstore focusing on all things spooky and scary. Many people roaming on Barret Avenue may have noticed “blood” dripping from the walls where the old Currie Sound & Systems used to be. That’s where Jenny Kiefer (M.A. English, 2017), a horror author herself, will be opening up the new horror-themed bookstore, Butcher Cabin Books.

General interest bookstores tend to have thin offerings in the horror category. “It’s just sort of hard to have that discovery aspect of just going into a store and finding a book you didn’t know existed," said Kiefer.

Butcher Cabin Books will sell horror books as well as horror-themed gifts curated and created by local artists around Louisville. The grand opening at 990 Barret Avenue (pictured below) is scheduled for Oct. 15, according to a post on the bookstore’s Instagram page. Read more. 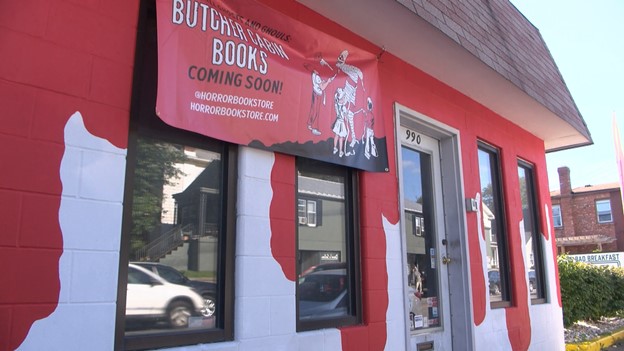 A reminder that listening sessions for the A&S dean search are taking place in person on Tuesday, September 27. A remote option will be offered on Wednesday, September 28, and those links will be disseminated shortly beforehand. Please see below for the session schedule and names of the Dean Search Committee. 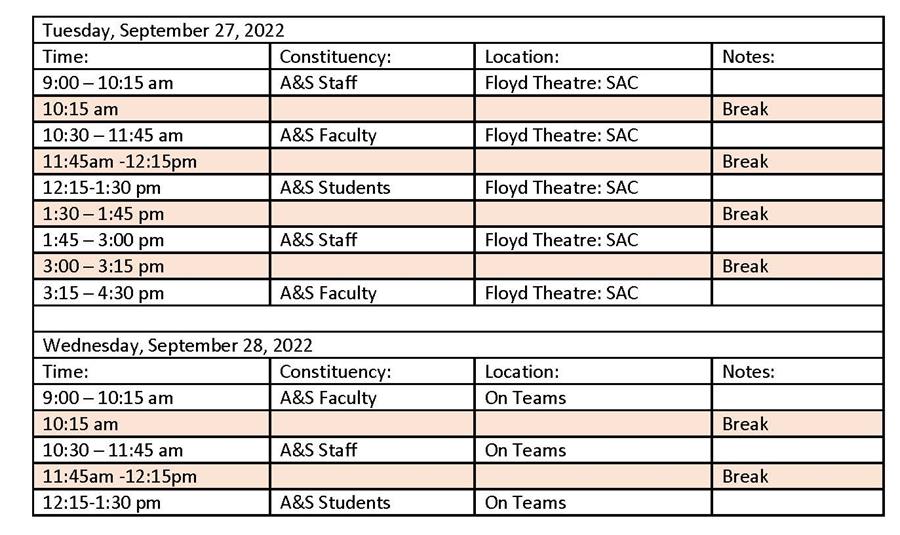 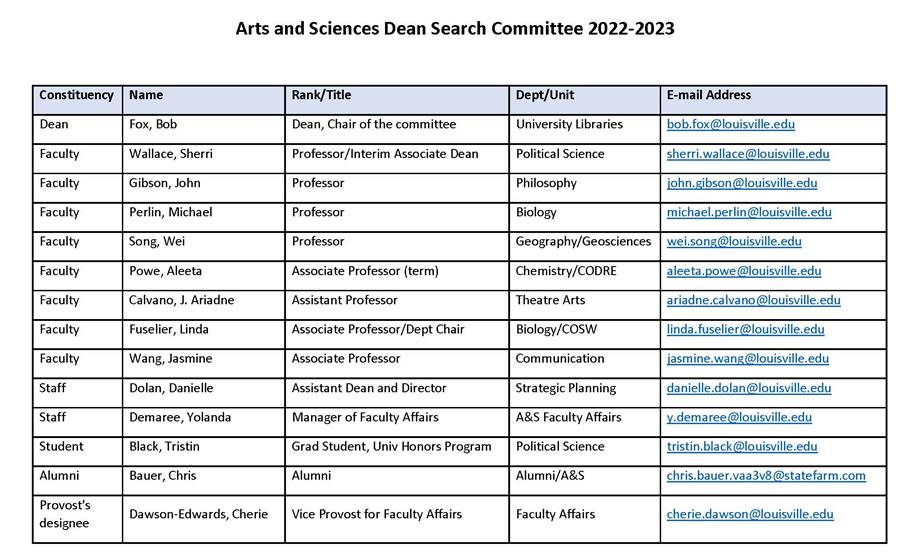 Open Enrollment begins Monday, October 3, 2022, and continues through October 14, 2022.  For more information and to review 2023 Benefit Plan Rates, please visit Louisville.edu/hr/benefits/openenrollment.  Please remember, this is your only chance to add, drop or change your benefit elections and dependents, unless you have a Qualifying Life Event during the year.  To participate in a health care or dependent care Flexible Spending Account (FSA) ion 2023, you must log into your benefits account and enroll or reenroll, even if you were enrolled in an account for 2022.  FSAs will default to “no election” if you do not re-enroll into an account.

2022 Annual Leave Adjustment Reminder.  The December 31, 2022, deadline for the annual leave adjustment is quickly approaching.  Staff may not carry forward more than two times the amount of leave they are currently eligible to accrue.  We recommend that you review your accrued leave amount and determine if you are nearing the maximum hours allowed for carryover.  Your balance will need to be below the maximum accrual amount by December 31, 2022. 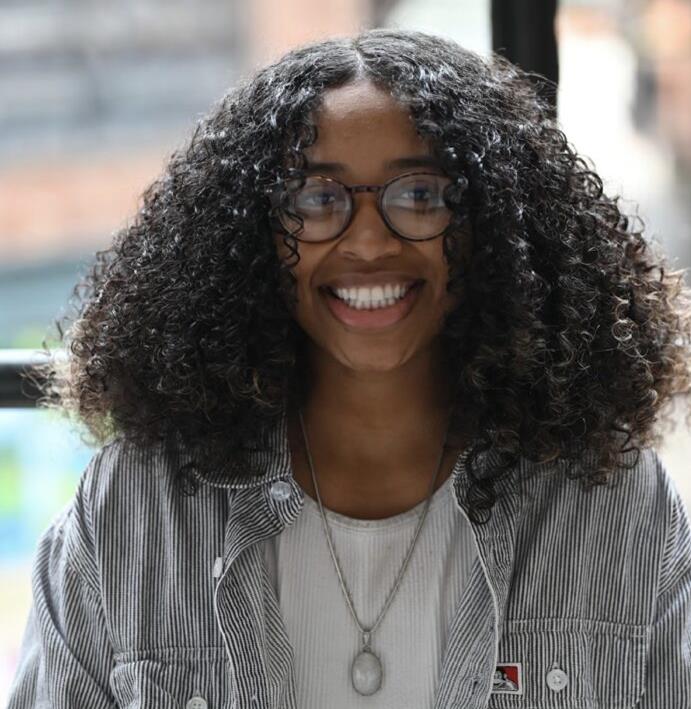 Congrats to Mery Muluberehan (pictured above), a political science major and Woodford R. Porter Scholar, for winning a Voyager scholarship for public service. The Louisville native is part of a group of 100 U.S. college students named to the inaugural cohort of awardees. Also called the Obama-Chesky Scholarship for Public Service, the award includes up to $25,000 a year for the students’ junior and senior years ($50,000 total) to alleviate the burden of college debt so the student can pursue a career in public service. The student also receives a $10,000 stipend and free Airbnb housing for a “Summer Voyage” to pursue a summer work-travel experience between the junior and senior years in college. After graduation, awardees will receive a $2,000 travel credit every year for 10 years (for a total of $20,000).

“It feels surreal to be a part of the inaugural cohort of Voyagers,” Muluberehan said. “I’m so excited to be given the opportunity to not only represent UofL, but our state of Kentucky as well.” She hopes to study human rights law after graduation from UofL and also wants to use some of her travel money to work in education in her parents’ home country of Ethiopia.

All UofL students are invited to #HatchYourPotential through the unique hands-on learning opportunities afforded by The Bird's Nest, a new student-run advertising agency in the Department of Communication. Interim Dean David Owen said, “The Bird’s Nest exemplifies the value of a liberal arts education. While students are discovering new knowledge and understanding inside the classroom, they are also acquiring real-world experience outside the classroom." For more information, contact birdsnest@louisville.edu, visit https://birdsnestlou.com,and follow @thebirdsnestlou on Twitter, Instagram, TikTok and LinkedIn. Read more. 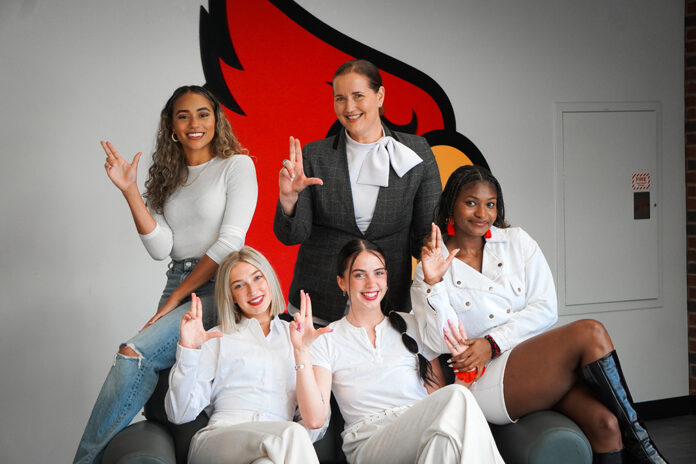 Laura Douglas (B.A. Political Science ’71), the first Black woman to receive a law degree from UofL, was recently the subject of a profile by WHAS. Since retiring from LG&E and KU in 2017, Douglas has served as interim co-director of the Louisville transit authority (TARC), interim CEO of the Muhammad Ali Center, and Interim president and CEO of the West End Opportunity Partnership. Read more from WHAS about Douglas's remarkable career.

Professor of Biology Lee Alan Dugatkin was recently interviewed for NPR’s “On Point,” for a new series called “Essential trust: What trust is, why it's important, and what happens when its lost.” Dugatkin is the author of, most recently, Power in the Wild: The Subtle and Not-So-Subtle Ways Animals Strive for Control over Others. Listen here.

Dr. Arnold (Arnie) J. Karpoff, a long-time faculty member in the Biology Department, passed away on April 15, 2022. Dr. Karpoff joined UofL in July of 1969, where he taught a variety of courses including Plant Biology, Plant Anatomy, Histological Techniques, Experimental Biology for Teachers, General Botany, and Introduction to Biological Systems. His two sections per semester of this latter class generated on average over 5,600 student credit hours per year. Arnie was continually developing new online materials allowing students to take the introductory class either on campus or off depending upon their particular needs. During the latter stages of his career, his focus was on developing new biology education materials and reviewing textbook chapters for six different publishing companies. Dr. Karpoff was a valued advisor and contributed a great many service activities at the department, college and university levels, especially his long-standing contributions to the Admissions and Appeals Committee. He has been missed since his retirement in 2014 and will long be remembered by all who knew him. 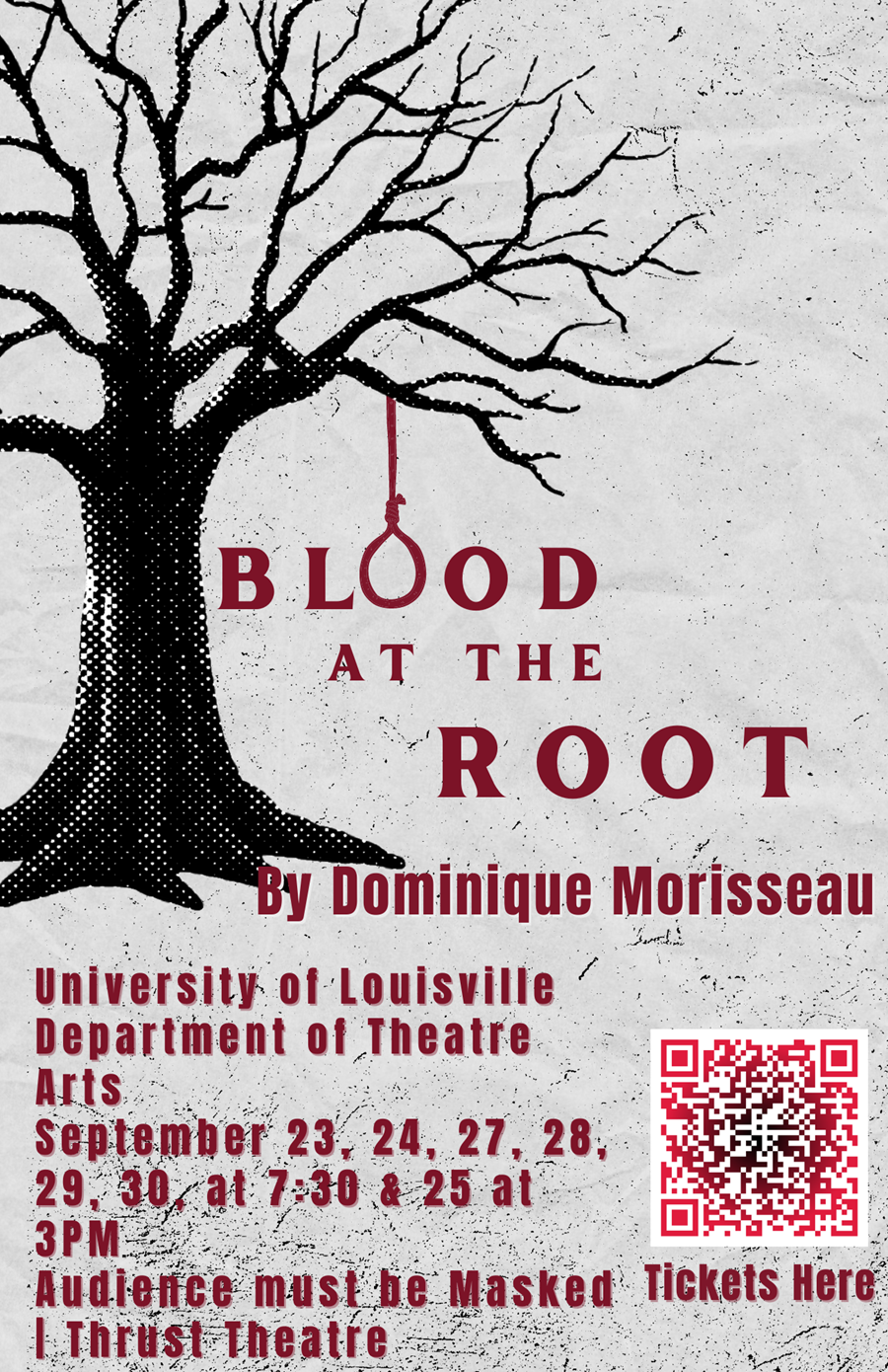 Performances of Dominique Morisseau’s Blood at the Root, the opening play in the Theatre Department’s mainstage season directed by Department Chair Nefertiti Burton, are ongoing through September 30. This powerful work by one of the most highly regarded playwrights working in America today is inspired by events at a Louisiana high school that led to unjust charges against six black students in the town of Jena in 2006. The boys became known as the Jena 6. National demonstrations and protests followed their arrest and presaged the emergence of the Black Lives Matter movement. Additional background on the Jena 6. The playwright is a MacArthur “genius grant” recipient whose Obie Award–winning play Skeleton Crew has been running on Broadway since January. Tickets are available online at the QR code in the flyer above or by calling the Theatre Arts Department Box Office at 502-852-7862.

The UofL Kentucky Author Forum is bringing internationally renowned journalists Josh Chin and Evan Osnos to campus and to the Kentucky Center on September 29. Josh Chin recently co-authored Surveillance State with fellow Wall Street Journal writer Liza Lin, telling the story of how China’s Communist Party is building a new kind of political control. For more than a decade, Chin has covered politics and tech in China for the Wall Street Journal. Evan Osnos joined the New Yorker as a staff writer in 2008 and covers politics and foreign affairs. His book Age of Ambition: Chasing Fortune, Truth, and Faith in the New China is based on eight years of living in Beijing; it won the 2014 National Book Award and was a finalist for the Pulitzer Prize. Event details:

The College of Arts & Sciences is a proud sponsor of the Black Alumni Summit, Oct. 17-22. The Black Alumni Summit aims to provide opportunities for Black alumni to reconnect with old friends, meet new faces, recall memories, and build community. The Black Alumni Summit features an engaging mix of events, from networking with fellow alumni and connecting with current students to social and festive occasions. All programming is designed to welcome the university’s Black alumni and to celebrate their ties to UofL. For more information and to register, visit https://www.uoflalumni.org/s/1157/19/alumni/interior.aspx?sid=1157&gid=1&pgid=6573

In her new book, My Old Kentucky Home: The Astonishing Life and Reckoning of an Iconic American Song, historian Emily Bingham traces the origins and permutations of the state song, from its performances across the continent beginning in the 1850s, through its widespread international renown as the state's "brand," to its 21st-century reassessment. Followed by a Q&A moderated by Brandon McCormack, and a booksigning. Wednesday, October 26 at 6:00pm to 8:00pm. Strickler Hall, 101, Middleton Theater, 2010 S. Avery Court Walk , Louisville, Kentucky, 40208. Free admission.