A Message from Dean David Owen

Welcome to the Fall 2022 semester. It is truly wonderful to see students enlivening campus once again.

Most of the Fall 2022 incoming class were sophomores in high school when Covid struck, and many of them spent a significant portion of high school in remote learning. We are fostering not only their adaptation to college, but for many of them, also their reacclimating to classroom learning.

Further, 39% of the incoming A&S class are identified as First-Generation College Students, and most of our students have significant outside obligations, including work, childcare, elder care, etc. Please pay particular attention to first-year students, as they are the ones who will struggle the most with the transition to college and a whole new learning environment.

I have two central priorities for the year:

Associate Dean Jason Gainous is steering the effort to refine and implement our three-year retention plan, along with Assistant Dean for Advising Danielle Dolan. While they are leading our efforts, every member of the College plays a role in improving student success and retention.

A trust deficit is endemic to higher education, but A&S is facing an especially concerning trust deficit. We cannot be successful at fulfilling our mission if we do not have a culture of trust. Trust is relational: it much be earned through aligning what we say with what we do; and trust must also be extended to others. We will work throughout the year to develop higher levels of trust in the College.

I appreciate all of your efforts over the summer to prepare for the new academic year. We will continue to move the College forward as we discover new knowledge, create new understandings, and transform lives and society.

Congratulations to SoFab Inks, a team composed of chemistry graduate students Peter Armstrong and Sashil Chapagain, who, along with engineering student Blake Martin, in UofL’s Solar Manufacturing R&D lab, won $200,000 and are moving on in the American-Made Perovskite Startup Prize. This prize is designed to accelerate the growth of the U.S. perovskite industry by supporting the rapid development of solar cells and modules that use perovskite materials. The UofL team will enter the Liftoff Contest to compete for a $500,000 cash prize. Read more about the competition and how perovskite improves upon silicon, the primary semiconductor used in solar cells.

Congratulations to the following A&S faculty who have been awarded up to $7,500 in Jon Rieger Seed Grants for early career researchers:

Undergraduates in Environmental Science and Biology Among 18 SROP Researchers

Thanks to UofL's Summer Research Opportunity Program (SROP), Maddy Cicha, an environmental science major, spent the summer measuring how trees and other vegetation provide a sound buffer along heavily trafficked roadways in Louisville. “This summer I have much more control over the study design and analysis of the data than I’ve had on previous projects,” she said.

Ethan Mills, a biology major with plans to become a trauma or critical care physician, participated in work that includes purifying hemoglobin from swine red blood cells, and then conducting experiments with the blood. Of his mentor, Biology Professor Michael Menze, Mills said, “He has taught me the importance of maintaining a positive attitude despite setbacks, and carefully planning experiments before beginning them."

Maddy and Ethan were among the 18 UofL student who participated in the 10-week program, receiving $3,500 in living allowances for the duration. Read more.

A&S students Dorian Brown, Alex Reynolds, and Bryson Sebastion are among the top 4 Student Government Association leaders, elected in March for the 2022-23 academic year. The "top 4" are made up of the student body president, executive vice president and two vice presidents (one for academics and one for service). Together, they lead the university’s student government network across eight schools and colleges. Read more about their thoughts on the new academic year. 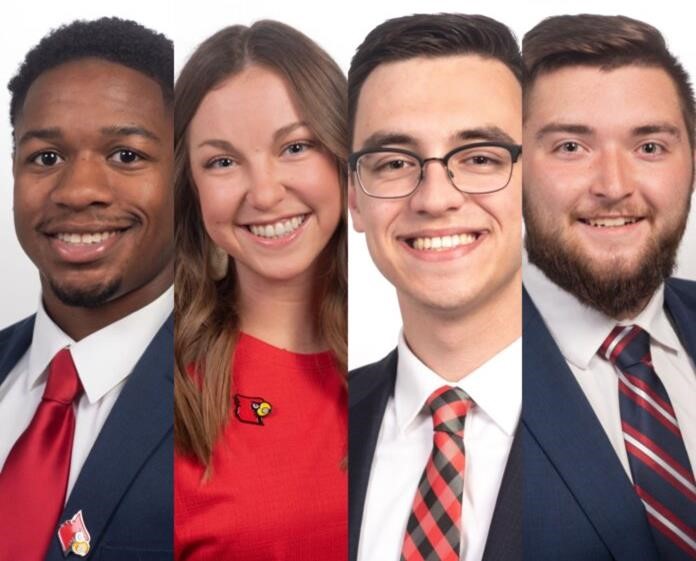 Softball player Cassady Greenwood, a 2022 psychology major and Spanish minor, began her college softball career as a Cardinal in 2019, playing 34 games with four starts as a freshman. Her sister, Carmyn, a marketing major, also plays softball and transferred to UofL from Auburn after the 2020 season. This past season was their last together. Carmyn set a school-record .408 career batting average and numerous athletic awards, and Cassady was named to the ACC Academic Honor Roll. Cassady is now pursing a master's degree at the University of Alabama in Birmingham, where she continues to play softball.

The sisters leveraged their softball fame for a good cause, collaborating to sell Team Greenwood branded gear and donating their Name, Image, and Likeness earnings to the national nonprofit Blessings in a Backpack, which collects food for school children. Read more. 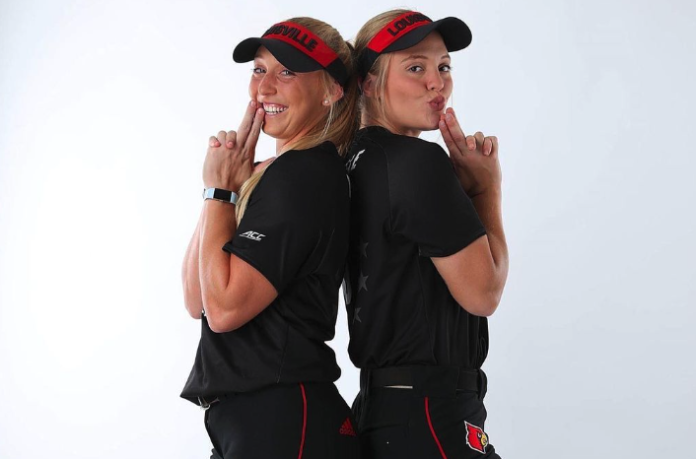 Arts & Sciences and the Dept. of Political Science are are very proud to claim the 2022 Alumni of the Year, Lucy Helm (’79 Political Science, ’82 Law). Helm retired from Starbucks Coffee Co. after a prestigious 21-year career in legal and human resources roles, including serving on the company’s executive team as executive vice president, general counsel and secretary and executive vice president, chief partner officer (leading human resources). Helm received a Bachelor of Arts with highest honors in political science in 1979 and a Juris Doctor, cum laude, from the Brandeis School of Law in 1982. Helm is one of 18 honorees who will be celebrated this fall during Homecoming Week, Oct. 17-23. Read more.

Dean Owen visited Dr. Cronholm at her home in Philadelphia to deliver the award, along with Senior Director of Development Denise Bohn. Photo by Denise Bohn

Congratulations to the 173 A&S faculty and staff who were named 2021-22 Student Champions. These were mentioned in the July 25th Monday Memo but with an inaccessible link. That link is now fixed, and A&S’s recipients may now be viewed here. Further, UofL News wrote about the significance of these student-nominated awards, and the certificates are being distributed to department chairs this week.

Congratulations to John Gilderbloom for winning the 2022 Community and Urban Sociology Section's Robert and Helen Lynd Award for Lifetime Achievement from the American Sociological Association.

Professor Hall also just completed editing the 6th volume of The Harold Pinter Review, which includes three conference presentation papers by graduate students in the Comparative Humanities graduate program: Katie Cross Gibson, Flora Schildknecht,and Nancy Jones. Students in her HUM 509/609 course last fall were offered the opportunity to write papers for the Louisville Literature and Culture Conference on the topic of the theater of the absurd as part of the International Harold Pinter Society's panels on the topic.

Congratulations to Comparative Humanities professor Michael Johmann on successfully swimming across Loch Lomond, a 21.6-mile freshwater loch in Scotland, making him the first American male and the oldest swimmer overall, at age 60-1/2, to make the journey. This fall Johmann, who is also a UofL alum, marks his 35th year teaching at UofL. Read more.

Kudos to Oliver Kratholm (B.S. Psychology 2022) for successfully completing an internship and then being hired by Seven Counties Services, which serves Louisville and surrounding counties with mental and behavioral health services, substance abuse treatment, and intellectual and developmental disabilities services. Kratholm is also doing work with a research lab at UofL and plans to eventually return to school to pursue a Ph.D. in clinical psychology. Read more.

Congratulations to Megan Poole, assistant professor of English, together with law professor Shavonnie Carthens, for being awarded funding through UofL’s Health Equity Innovation Hub for the project, “Getting the Listening” in Louisville: Environmental Health Literacy and Justice in and around Rubbertown. Poole, Carthens, and other partners will investigate community questions related to environmental law and environmental justice, with a focus on the disproportionate impact of air pollution on West Louisville’s Black community. Read more about the award.

All employees traveling outside the United States for work purposes, regardless of funding source, must follow the procedures on the Office of the Provost's International Travel webpage. For more information or if you have questions, please contact Rebecca Dixon or visit the webpage.

The Office of Study Abroad and International Travel will host a number of workshops in September and October on international partnership development, international travel procedures, teaching abroad and study abroad information for faculty and advisors. RSVP here. For more information or if you have questions, contact Rebecca Dixon, 852-0295, or visit the webpage. 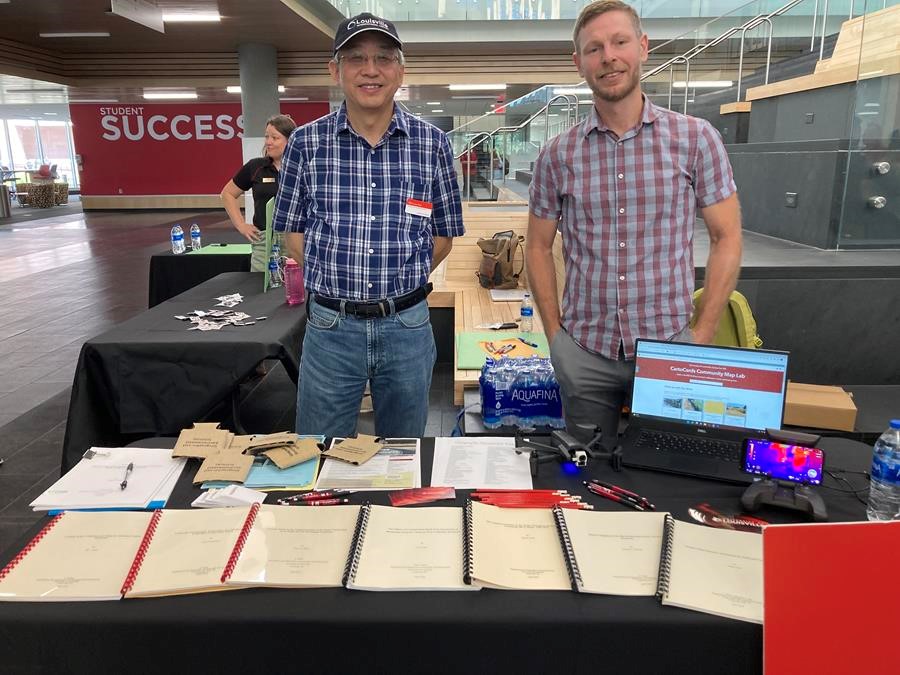 Wei Song, Chair of the Department of Geographic and Environmental Sciences, and DJ Biddle, Director of the Center for Geographic and Information Sciences, at the A&S Open House. Many thanks to those who participated. Its focus was co-curricular activities, e.g., academic clubs, undergraduate research, and student publications. Note how Wei and DJ highlighted undergraduate research by displaying students' research papers.

The A&S Open House on Aug. 19 was the first in a series of opportunities we have for exposing incoming students to the myriad paths of study in A&S. The "Accolade" event on Aug. 27 for Honors and scholarship-eligible students was another. Next are:

International Day for People of African Descent, Wed., Aug. 31, will be the first in a UofL series of events leading up to Juneteenth 2023 highlighting the journey to freedom for African American descendants of enslaved persons. Please join us for a film screening of "The Evers" and keynote discussion with Reena Evers-Everette, daughter of Medgar and Myrlie Evers. Read more and event details.

The Hite Institute of Art and Design is hosting a welcome event for the Maker Faire at the Rowan Building, 1606 Rowan St., on Sept 9, 7:00 - 9:00 pm. Read more about the Maker Faire taking place on September 10. 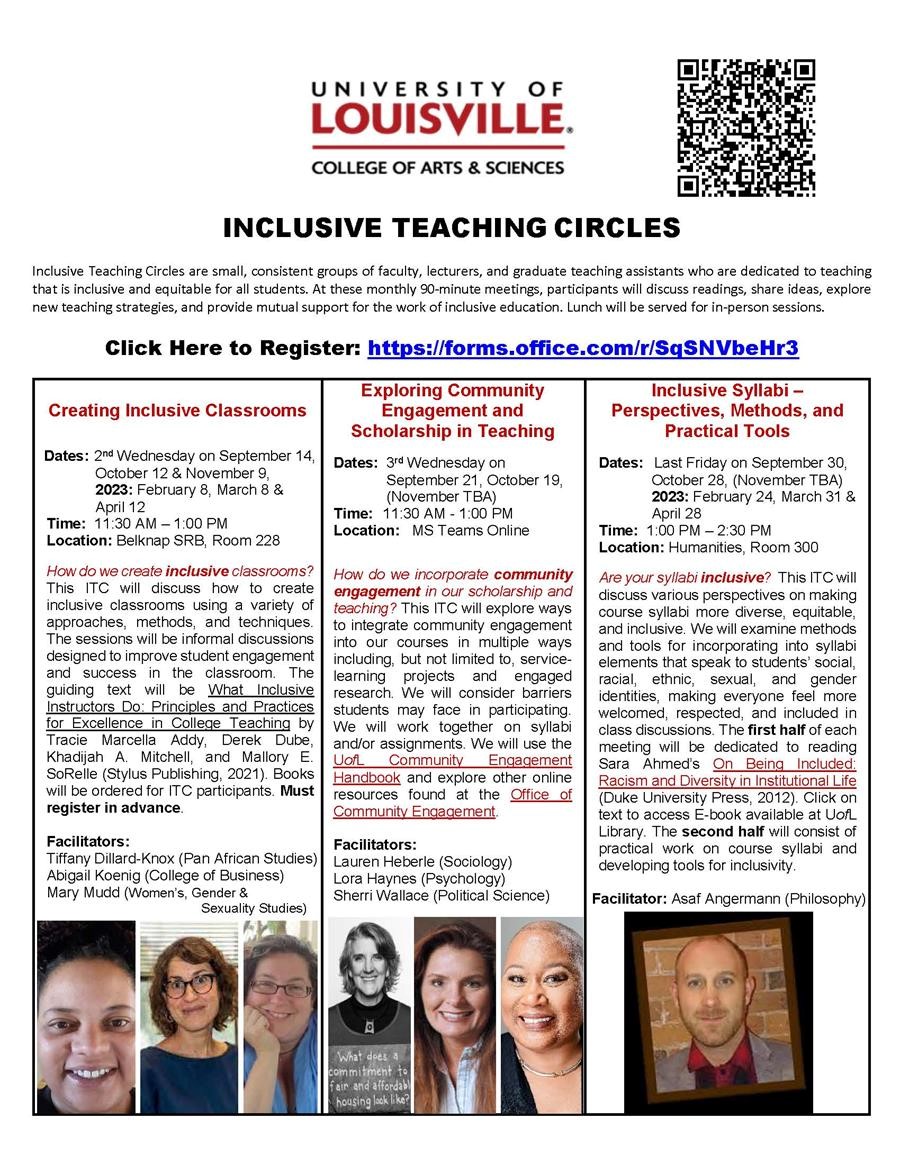