(May 3, 2013) LOUISVILLE, Ky. - The 10 University of Louisville graduates will pursue a variety of graduate degrees and research programs, as well as business opportunities. 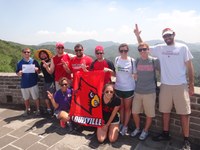 See where members of the McConnell Scholars Class of 2013 are headed next:

The group joins the McConnell Scholars' alumni network, which totals more than 200 Kentucky graduates. The McConnell Center's alumni enjoy successful careers in fields such as the arts, business, education, law, medicine, the military, music and politics, among others.